In the main article about Sons of Perdition I briefly discussed the dispute about the origin of the pseudonym Zebulon Whatley. One school (Military-Sheriff theory) argues that it’s composed of the first name of the military Zebulon Montgomery Pike and the last name of sheriff Willis Whatley, while a competing school (H.P. Lovecraft theory) argues that Zebulon Whatley refers to the character Zebulon Whateley (another spelling) that appears in a couple of H.P. Lovecraft's short stories. In this blog entry I analyze the arguments and evidence. 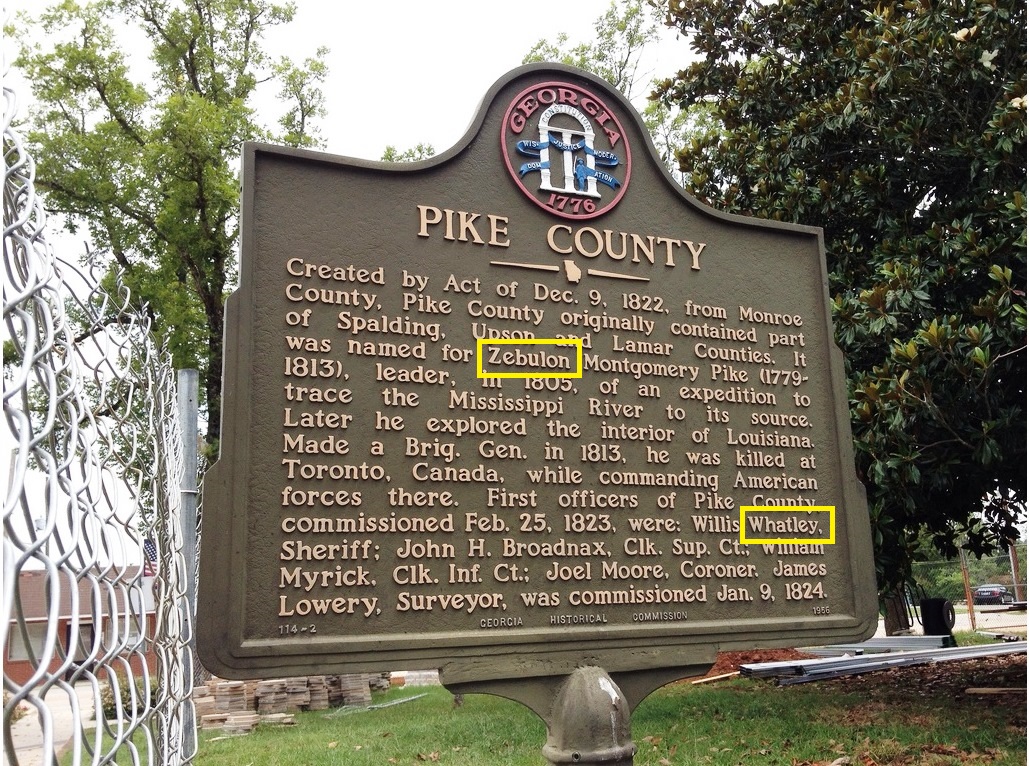 Zebulon Whatley is a pseudonym composed of the first name of the military Zebulon Montgomery Pike and the last name of sheriff Willis Whatley.

The composition of the pseudonym is highlighted in yellow frames (see picture to the right) on this historical marker outside Pike County Courthouse in Zebulon, GA.

The historical marker is the only emipirical evidence that supports this theory. The evidence is not strong. The infinite monkey theorem states that a monkey hitting keys at random on a typewriter keyboard for an infinite amount of time will almost surely type a given text, such as the complete works of William Shakespeare. In this case it's only the first name (Zebulon) and the last name (Whatley) on a historical marker and certainly no match for a hard hitting monkey. Zebulon Whatley, who is a Texan, is moreover not known to have any connection with the state of Georgia (except the town name Zebulon, that is). The Ambassador (normally fact-orientated and evidence-based) is for some reason a strong supporter of this theory. The theory seems far fetched even by a benevolent interpretation. 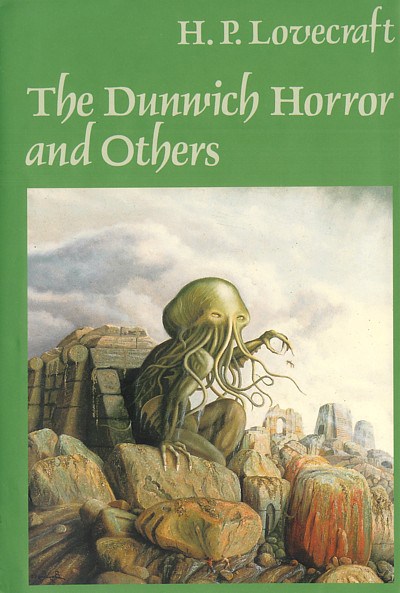 Zebulon Whatley refers to the character Zebulon Whateley (another spelling) that appears in a couple of H.P. Lovecraft's short stories, for example in "The Dunwich Horror" (see picture to the left).

Zebulon Whatley is known for his interest in books of science, pseudoscience and religion, mythology and human behavior.

Zebulon Whatley is a member of H.P. Lovecraft Historical Society. The step is thus not far to adopt a fictitious name of a H. P. Lovecraft character.

Zebulon Whateley appears in "The Dunwich Horror" and is a distant relative of Wilbur Whateley from a branch of the family that was not completely mad. The Whateley's were a "decayed" family. The theory is based on the idea of a man from a poisonous family line would have left the area and started anew. It's well documented that people often change the spelling of their surname to leave the past behind. Some scholars argue that this particular excerpt from "The Dunwich Horror" is the key passage in the understanding of the pseudonym: "Old Zebulon Whateley, of a branch that hovered about halfway between soundness and decadence, made darkly wild suggestions about rites that ought to be practiced on the hill-tops." The theory seems to be comprehensive and consistent.

The theoretical evidence is very plausible. The empirical evidence relative strong. The advocates of this school still have to present some hard evidence to support their theory.

The evidence supporting the two competing theories are insufficient and further research is needed. Maybe Zebulon Whatley's spitting image Douglas Wheatley (a cousin?) could shed some light on this matter and advance research? You may now ask: for God's sake, why not settle the dispute by just asking Zebulon Whatley? Uhm…this is not the way we do things in Sweden.