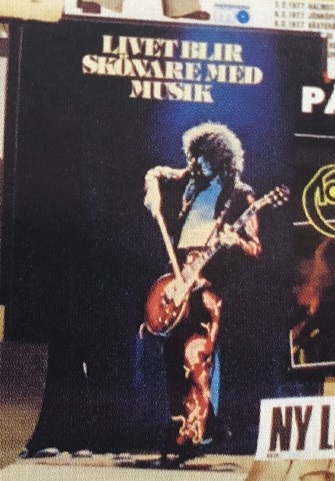 "When I was a child, I spake as a child, I understood as a child, I thought as a child: but when I became a man, I put away childish things" (King James Bible). Well, now is time to regress to childhood. When I grew up my entire room was wallpapered with posters from the Swedish idol magazine "Poster", which existed between 1974-1980. The magazine was founded by Hans Hatwig, a German publisher who began his career in pornographic publishing. The poster standard measure fit my walls perfectly. Moreover, I used to spend hours in planning and rearranging them. However, Black Sabbath always had a prominent place as well as Led Zeppelin and Deep Purple. Other posters (like BTO, Kiss and Angel) were short-lived and quickly placed in the poster junkyard. The constant rearranging caused a lot of wear and tear since the posters were attached with needles or/and poster putty. All of the posters are now long gone. I don't regret getting rid of them except for the poster on the left, which isn't from "Poster" (the grainy image is taken from a book). This is the story. I noticed the poster in a local record store in the small town where I grew up. I was determined to have it and I nagged and nagged. The shop owners were reluctant, but finally they caved in and let me have the poster. If they only had known what happened next. I didn't take good care of it. I should have mounted and framed it. Needles and poster putty caused a lot of damage and made it tattered and fragile. I got rid of it together with the rest of the posters in a thoughtless and careless act of trying to leave adolescent idolatry and become a responsible adult. Of course, it didn't take. I have never seen my precious poster again, until I found a picture of it in a book about rock photography (read more below). 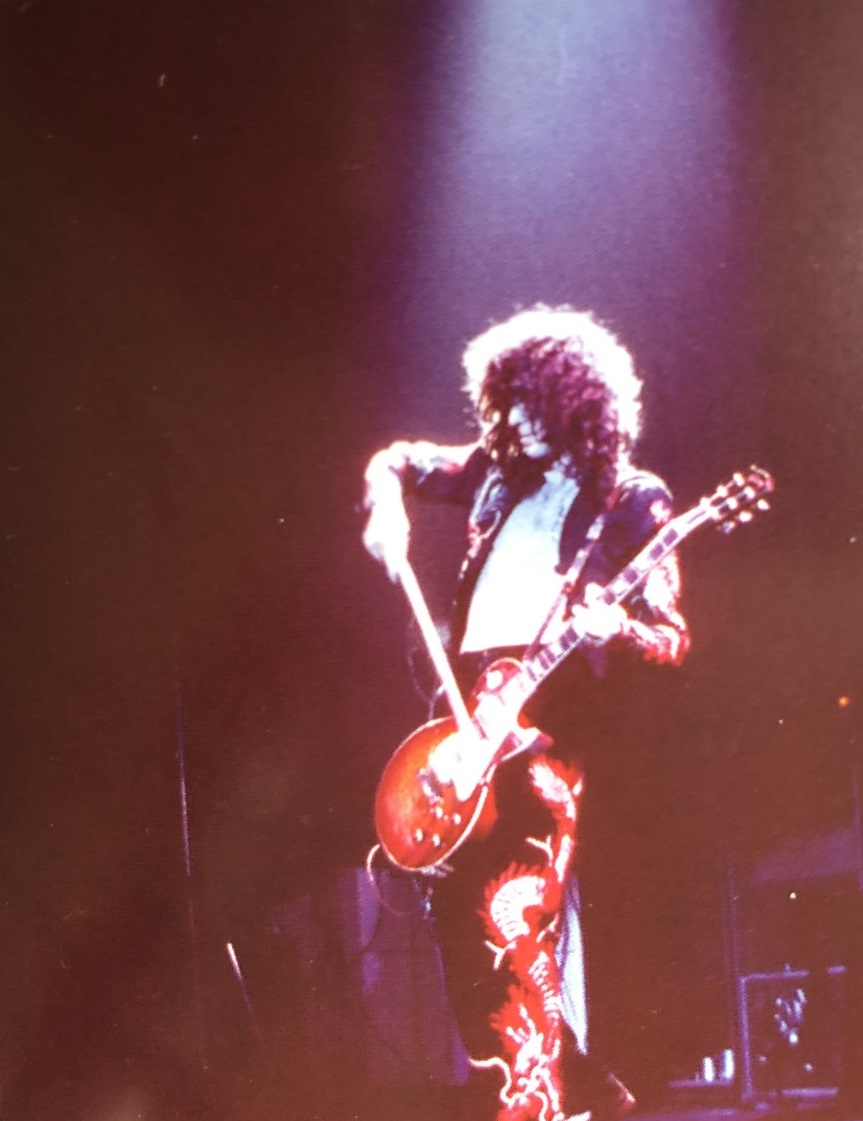 The poster photo was taken by the legendary Swedish photographer Torbjörn Calvero (1949-2016). Mr Calvero could easily be mistaken for a rock star himself. He fraternized and took photograps of everybody that were somebody in the 1970s. I recommend the photo book "Från Abba till Zeppelin Calveros 70-tal" (Swedish only, but the photographs speaks for themselves) Publisher Prisma, Norstedt Förlagsgrupp AB (2008), ISBN 978-91-518-5163-1. The photo depicts Jimmy Page of Led Zeppelin in his Full Dragon suit. The suit was first worn throughout the five shows at Earls Court, London on May 1975. Contrary to popular belief the suit wasn't only for the 1975 tour as it was seen many times throughout 1977. Anyway, I love the photo of the legendary guitarist with his Gibson Les Paul and bow literally bathing in stage light. This was the 1970s and rock photography peaked. Needless to say, nothing was considered to be too bombastic in the 1970s. On November 4 1977 the movie "The Song Remains the Same" premiered at China, Stockholm (no longer a movie theater). I was there. The movie is a 1976 concert film. The filming took place during the summer of 1973, during three nights of concerts at Madison Square Garden in New York City, with additional footage shot at Shepperton Studios. The film premiered three years later on 20 October 1976 at Cinema I in New York, on 22 October 1976 at Fox Wilshire in Los Angeles, and at Warner West End Cinema in (and a year later in Sweden). It was accompanied by a soundtrack album and a DVD was released in 1999. Promotional materials stated that the film was "the band's special way of giving their millions of friends what they had been clamouring for – a personal and private tour of Led Zeppelin. For the first time the world has a front row seat on Led Zeppelin." It was really front row. Singer Robert Plant's trousers were so tight that you could tell his religion. The concert footage and sequences are fabulous, but the rest of the movie is just unbearable. But, I thought it was the greatest movie ever when I stepped out from the movie theatre so many years ago. To the best of my recollection there were no female moviegoers, which always is a warning sign. What can I say. I have put away childish things, like poster putty. However, I miss my beloved poster. Maybe I didn't treat it quite as good as I should have. Anyway, please come back.