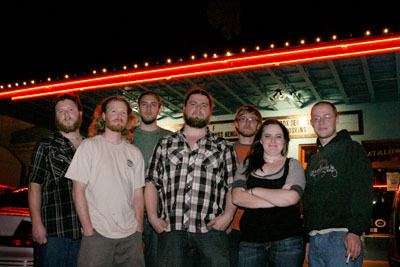 Pinebox Serenade (hence PS) is a band from Denton, Texas see website. Pinebox is American slang and refers to a simple coffin. Pinebox Serenade is a perfect band name for a "gothic country" band, or "gothic americana", “gothic folk rock”, “roots-meets-bluegrass-and-goes-goth band” or "goth-grass”, are also used as labels. Pinebox Serenade was formed in 2003 by Chris Welch (guitar and vocals) and Patrick Newkirk (mandolin and vocals). They started as an acoustic trio with bluegrass influences. Denton is an important cluster in the world of ”Gothic Country”. The group also consists of five additional members: Holly Manning (violin), Tyler Adams (bass), Chris Ott (steel guitar and cello), Nick Foreman (banjo, accordion and vocals) and Jeff Barnard (drums). The members are also involved in other bands and play rock music of different hardness on the Denton scenes. The music of PS is rather close to rock, so this sideline is not completely unexpected and out of line. They are now reborn as a four piece string band style band, with Welch and Newkirk, longtime fiddle player Holly Manning along with new member Ben Bigby on upright bass. The lastest addition is Jeff Barnard on drums.

The music is not particular tortuous. The style of PS is close to rock and also close to alt-country, but with the difference that there are lots of lingering banjo, mandolin and fiddle. Chris Welch (in checkered shirt in the middle of the picture) writes most of the songs and has a good, deep baritone. The songs are of the highest class. With seven members in the band (and even more instruments) there’s an obvious risk that the sound would be thick and sanitized, but this is not the case here. WhatzUp Magazine has described the sound: “Then they play original mountain music and bluegrassy dirges and smoky campfire songs, music that is formed from the dirt of despair, songs of love and rejection, life and death, daily pleasures and hourly pains.”

Pinebox Serenade has released three albums " Pinebox Serenade" (2005), "Let The River Take Them Home" (2008) and “The Silent Years” ( 2013) and two EPs, "All Is Not Lost" (2016) and "Haphazardly" (2020). The first album was released on Hot Links Records, the second album was released on the now defunct Devil's Ruin Records. The third album was self-released. The latter album has a more rock-oriented sound compared to the first two albums. I prefer their “countryish” sound, however. All three albums have been recorded and produced by Brent Best (ex-Slobberbone). All cd release parties have taken place at Dan’s Silverleaf in Denton (the information about the first album is however unclear). The second album “Let The River Take Them Home" is out of print and extremely difficult to find (the curse of a release of relatively few copies on a company that no longer exists). I put in a lot of work to find an album. I finally found the album in Graz, Austria (!), where else? I was however close to a nervous breakdown when the shipping dragged on (18 days), which is long time for shipping from Austria to Sweden. It was unclear if the third album would be released in digital format only or if there also would be some physical copies (they planned to distribute cds at least locally). I sent an email to Chris Welch. His reply was however reassuring. PS was going to distribute physical copies on Bandcamp. I was very pleased with the information, since cd is my preferred format and I don’t live in Denton, Texas. In October 2013, I bought one of first copies (first edition and limited to 20 copies!). Very exclusive, indeed. 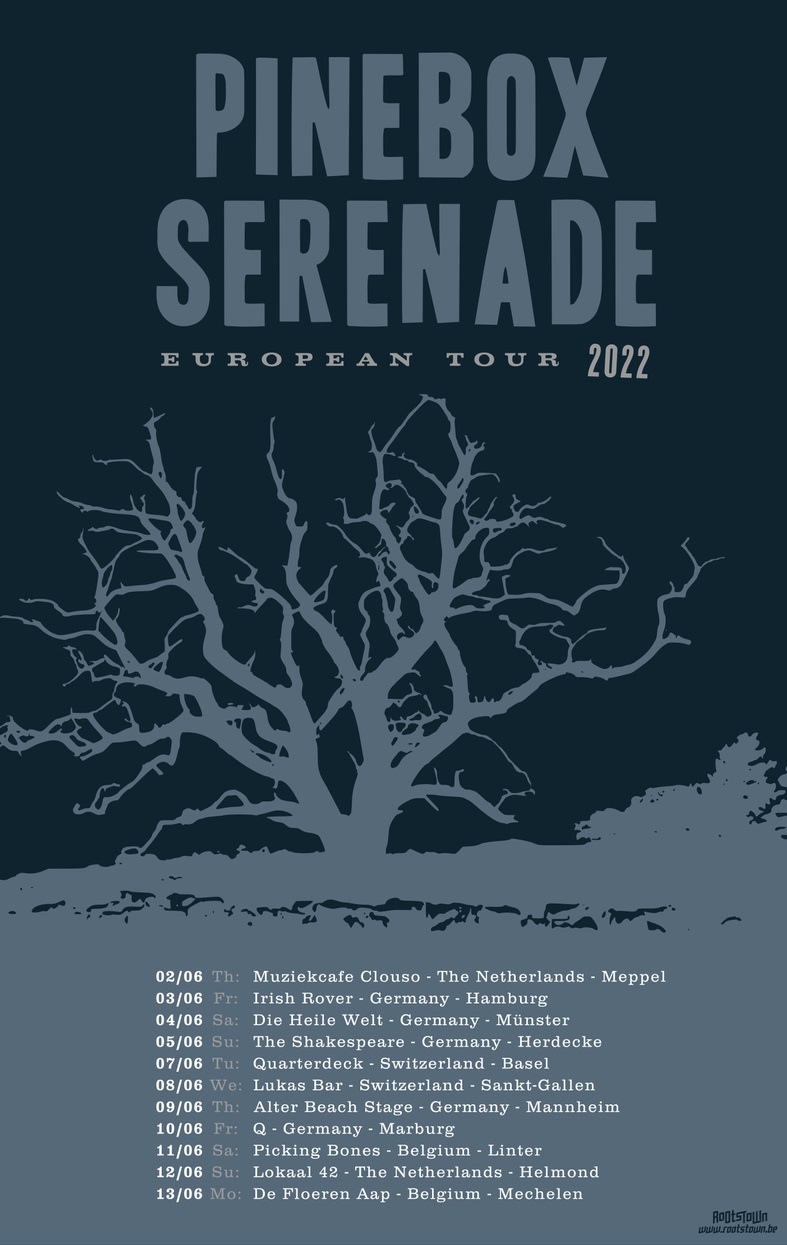 It's been quite from Pinebox Serenade for a long time. They called it quits in 2016. In an article in the Dallas Observer in March 2021 Chris Welch explained: "We just kind of quietly put this thing to bed with no real intention to come back to it. This kind of music was less popular, and it was hard to book shows. There was just nobody else to play with." In my humble opinion. Their music were perfectly alright. It's the human beings that are the vermin. But on September 20th 2019 they wrote on their Facebook-page "After being gone for a few years, we are returning to you as a four piece all acoustic string style band, consisting of acoustic guitar, mandolin, violin and upright bass. We are proud to announce that with this new lineup, we will be touring Europe next June 2020!" However, bad luck followed. Frontman Chris Welch suffered a stroke in December 2019 and spent about a year relearning how to play the guitar and to sing. The 2020 tour was postponed due to covid-19. After no end of bother Pinebox Serenade finally went overseas in the summer of 2022. Halfway through the tour in Netherlands, Belgium, Germany and Switzerland they had to cancel (!). "Due to unforeseen circumstances, we have had to make the difficult decision to cancel the rest of the Pinebox Serenade European tour. This breaks our hearts to have to do this. We want to thank all of the venues and promoters who made this tour happen, and of course all of you who came out to see us. Most of all thank you to Kurt De Bont and Rootstown Booking, we really appreciate your hard work." That was a shame. It seems like Europeans are especially drawn to the dark sides of country music. In some cases, more than Americans who are unable to perceive and appreciate domestic talent.