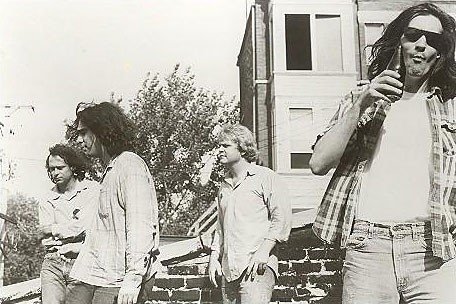 Souled American is band from Chicago, Illinois. The band was formed in 1983 by Chris Grigoroff (guitar and vocals) and Joe Aducci (bass). The band was later expanded with Scott Tuma (guitar) and Jamey Barnard (drums). Souled American is as far I know not formally disbanded, but Tuma and Barnard left the band during the early and mid-1990s and Grigoroff and Aducci have continued on their own. By now it should be abundantly clear that “gothic country” consists of mixes of styles, overlaps and have branches and twigs. A variant is ”lo-fi”. Within “lo-fi”one strives after authenticity rather than overproduction. It’s sometimes called "Melan Country" or "Country 'n' Strychnine”. The most well-known bands in the genre are Lambchop and Cowboy Junkies. They are however not included in this article series. One of the pioneering bands in ”lo-fi” was Souled American.

Souled American has released six albums. The four first albums: Fe (1988), Flubber (1989), Around the Horn (1990) and Sonny (1992) on Rough Trade (!). However, things went in the wrong direction. The album sales gradually diminished for the band. Even musically things went in the wrong direction. I don’t know if one can speak of musical development in conjunction with Souled American. More accurate is to say that they drew their concept to an extreme (and perhaps even slightly longer than that). The band’s concept was dreamy and whimsical harmonies, Fender VI six-stringed bass, “plink and plonk” sounding guitars and peculiar vocals, and over time, in increasingly distinctive shapes. Souled American returned in 1994 with the album Frozen followed by Notes Campfire (1997) on the German record company Moll Enträger. The album Fe is their most accessible album, while the last album, Notes Campfire, is their most fuzzy and introvert album. Since 2007 an album project is a work in progress. I have a re-release of the four first albums from Uproar Records packaged in stylish box. I bought it from Aquarius in San Francisco. However, it’s the original album covers that are shown below.

A caveat is in place. One really has to be in the right mood to get through a compilation with Souled American. Below is a suggestion for a CD compilation

Best songs: Make Me Laugh Make Me Cry, She Broke My Heart, Second Of All, Frozen, Deal