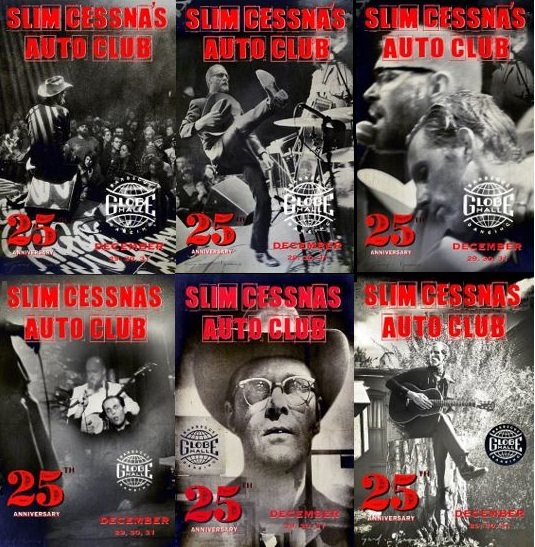 Slim Cessna’s Auto Club (SCAC) is definitely the most resistant, hardwearing and viable band in the gothic country genre. They have successfully defied all depressing survival rate statistics. SCAC celebrated the band's 25th (!) anniversary over three nights at Denver's Globe Hall on December 29, 30 and 31 2017. 25 years is an extreme life span in the genre. SCAC have somehow marched on. But, not without personnel turnover. Over twenty musicians have passed through the band since 1992. Musicians tend to go in and out of the band depending on their other commitments. This open door policy isn't very common in the genre, where leaving a band often is definite and irrevocable. This is a key factor in keeping the band alive and kicking. Another factor is the solid core. Since a couple of years back Slim Cessna (founder) and Munly Munly (Jay Munly) are the hub and creative force in SCAC. The current lineup, besides Cessna and Munly, consists of Lord Dwight Pentacost, Rebecca Vera, Ian O'Dougherty and Andrew Warner. With time SCAC have acquired a loyal, no to say fanatical, local fan base, the “Cessnuts”. SCAC is widely known for the rowdy live acts and regarded as the undoubtedly best live band in the genre. At live gigs they play the songs of their choice, with the arrangements of the day. After all the years on stage they have some experience to fall back on and dare to improvise. The distance from Stockholm to Denver (as the crow flies) is 7 845 km (4 875 miles). I wasn't in Denver to celebrate, but it must have been great. The bands Pale Sun and Wake The Bat opened the first night, DBUK consists to 80 percent of SCAC members) and Rotten Reputation opened the second night. The Breachers and Loretta Kill opened on New Years Night. 25 years is a long time. It's not over yet, SCAC. Live long and prosper!