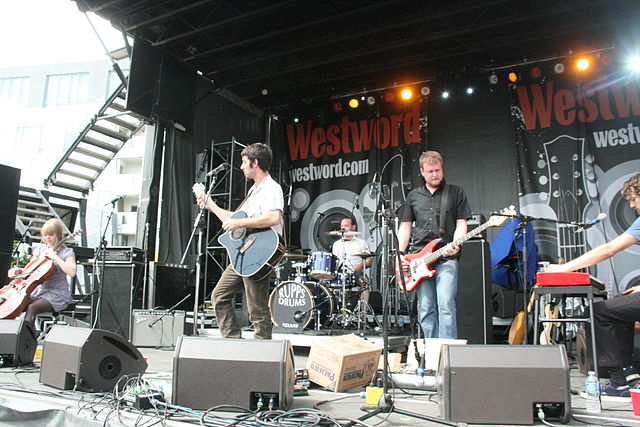 Murder By Death (hence MBD) is a band from Bloomington, Indiana, see website. The band name refers to the 1976 film “Murder By Death” by Robert Moore. Initially their name was “Little Joe Gould”. They changed their name to MBD because they thought that it better represented their sound. Murder By Death was formed in 2000 by Adam Turla (lead vocals, lead guitar, rhythm guitar and keyboards), Matt Armstrong (bass), Sara Balliet (cello and later keyboards), Vincent Edwards (keyboards) and Alex Schrodt (drums and percussion). Vincent Edwards left the band in 2004. Dagan Thogerson replaced Alex Schrodt in 2007 and Scott Brackett (keyboards, accordion, cornet, theremin, mandolin, backing vocals) joined the band in 2011. The founding members all went to the same college in Indiana and met at parties where they found out they were all musicians and also shared an interest in creating music. They began to play at small venues and parties. However, they quickly outgrew this format and began to tour extensively. They made 13 tours before they played in a place with 500 people. They worked persistently and purposefully to create a strong fan base. They are today, by “gothic country” standards, a very successful band. An important part in this development has been a close interaction with their audience and a lot of “do-it-yourself” activities, including crowdfunding of one of their albums (for example MBD would perform in your living room or basement for $4 000). In fact, the album became highly overfunded. The members didn’t have any jobs before they started MBD as full-time thing. It’s very rare in the genre. You don’t become a millionaire in the "gothic country" industry (very far from), so it’s nice to realize that they actually can live on their music (however, not really as millionaires). In an interview for Hybrid Magazine Adam Turley explains: “I've learned that when you're in a band, it is a business. Even if you don't want it to be. It has to be. You have to pay your taxes. So at least you can learn something along the way. Maybe when you're not in a band, years later, you can apply it to something else.”  My amateur assessment approximately 5000 km away is that the band will be able to keep going for another couple of years, before the members will have to pick up some other line of work (bank, insurance company or something even worse).

By some purists (that is, other than myself) MBD is labeled “indie rock”. Well, this label on the band is a matter of dispute. There’s perhaps more of rock than country in the music. But on the other hand, MBD would be just another ordinary indie band, if it weren’t for their weird, brooding and gothic sound. These properties qualify them for my prestigious article series. And someone has to patrol along the disputed and unsettled borders of gothic country and mainstream indie rock. MBD has been labeled "gothic country", “southern gothic”, “American gothic”, “dark whiskey devil music”, “true-grit Americana” and “western gothic”. The last epithet is very accurate, since MBD (from Indiana in the Midwest) seems to be obsessed with western stories and themes. According to their current record company Bloodshot Records biography of the band their trademark themes are “lust, betrayal, and classical archetypes of good and evil. Their songs have been called the sonic equivalent of ‘No Country For Old Men’.”

Their production is by no means an overproduction. Only six full-length albums in fourteen years, but on the other hand the band tour relentlessly. Between the tours MBD works on new material. Their slow production rate may also be determined by their “market strategies” (no valuation in this). MBD works both thematically (first albums) and non-thematically (later albums). The songwriting process normally begins with Adam Turla writing the melodies and lyrics. The music to the songs is then added by the whole band. The songs are then bent and shaped back and forth into the right mood and sound. Adam Turla has a deep beautiful baritone voice, which fits perfect to their dark lyrics.

Below is a suggestion for a 2-CD compilation.