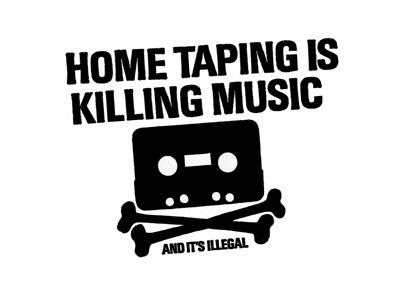 One of the most misdirected campaigns of all times is "Home Taping Is Killing Music". The campaign was launched by Chris Wright chairman of British Phonographic Industry (BPI) on Oct. 28, 1981. The campaign had a fateful and high-pitched tone ("and it's illegal") accompanied by a vivid imagery (a skull-like cassette and crossed bones). The background for this bizarre initiative was that the record industry felt threatened by the newly introduced dual cassette deck (single recorders and decks had been doing its thing for years). The dual cassette deck was considered as the eqvivalent to Cyberdyne Systems Model 101 Series 800 in Terminator 2 by the industry. They feared home taping (tape to tape) in an industrial scale. The underlying assumption was that home taping would cause a decline in record sales. Did they have reason to be concerned? The theoretical and empirical support was non-existent. In fact, home taping was often a gateway to a lifelong commitment as a paying consumer. The compact cassette can be summarized in crappy sound quality and poor substitute. They home tapers made copies and mixtapes for their own personal needs but in addition they bought vinyls, and later, cds. Some people may argue that home taping is morally eqvivalent to illegal downloading. However, there's a big difference. Illegal downloaders never had any intentions to begin to pay for music. The campaign failed and was ridiculed, parodied and mocked. The coverage ratio (using stamped logo and slogan on records) in the UK record industry was far from 100 percent. The cd player was launched. The nail in the coffin was when a UK court verdict ruled that "whilst it is clear that the copying of copyright material without permission is an infringement in almost all jurisdictions, the provision of a service or equipment to facilitate such copying, where that service or equipment has other legitimate uses, may not be an infringement or illegal." (CBS vs the Amstrad dual cassette deck). The campaign vanished into thin air. The campaign resurfaced 10-15 years later, but that's a different story.