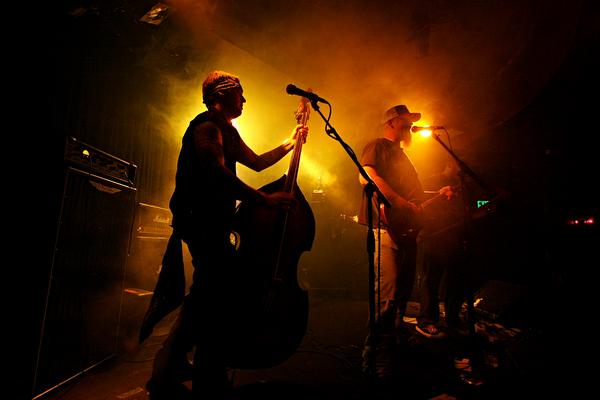 Pushin Rope is a band from San Diego, California. Finally, a band from the West Coast. "West" usually means Denver, Colorado in this article series. Everyone knows it’s a long distance from Denver to the Pacific Ocean. Pushin Rope is an excellent band name. Pushin Rope is American slang and refers to the act of trying to engage in sexual intercourse with a flacid (limp) penis (in the figurative sense to push a rope in front of you. The rope will, of course, bend). General used for someone unable to perform the task. Pushin Rope is also a pun, in reference to "pushing dope”. But this band doesn’t contain any west coast surfing junkies with a tan,  on the contrary. The band started in 2008 and consists of Josh Renner (guitar and vocals) and Sierra Colt (bass). The band also consists of Shawn Donahue (drums), Danny Iannucci ( banjo) and George Bitsakis (violin). Brent Gutzwiller later replaced Danny Iannucci.

The members have a diverse musical background and it’s therefore not very surprising that the music is an odd combination of outlaw country, bluegrass, delta music, punk rock and rock 'n roll. There’s absolutely no anxious fine-tuning, poking or finesse over these guys. On a poster the band declares: "picture Johnny Cash on crack meets Hank the 3rd at a whisky drinking contest". That is a pretty good description of how they sound, both on album and live. It’s very high energy and presence in the music. Pushin Rope has made two albums: ”Murderous Songs Of Despair” (2010) and “Blood On The Line" (2011), both self-released. They have also made a live-album "Live At The Belly-Up". The lyrics are inspired of religious themes. Pushin Rope has a song (Devil's Son) represented on one (Rodenticide III) of the four compilations with The Best of Dark Roots from Devils Ruin Records. Again, it’s a mark of quality. Their most known song "Reign In Hell" comes from John Milton's book Paradise Lost and refers to when Lucifer was cast out of Heaven: "It is better to reign in Hell than serve in Heaven." Here are the lyrics:

Best album: Blood on the Line