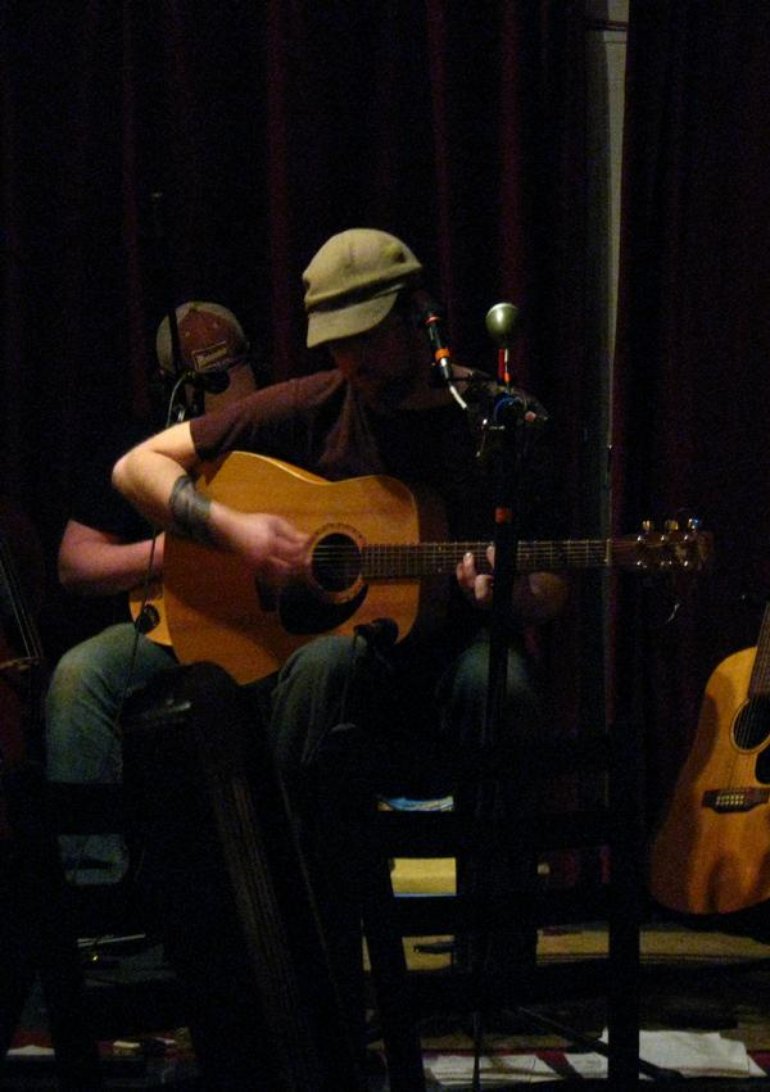 Two Step Slumber was a band from Portland, Oregon. They are not well-known. Not even by a gothic country genre yardstick. TSS should be filed under "gothic country", "southern gothic", "dark country", "eclectic folk rock" among other labels. TSS consisted of Jacob Russell (guitar and vocals) and Brent Greiwe (multi-instrumentalist: dreadnought guitar, resonator, banjo, mandolin, octave mandolin and cello). I came across them years ago, when I figuratively speaking was vacuum-cleaning the genre in search of the most important bands and artists. Their song "Dark Waltz" is ranked high on many gothic country playlists, but since they never released an album they were put aside. Until now. It's time for them to enter the Hall of Fame (of gothic country). It hasn't been easy to get information about the band. Internet isn't directly overflowing with biographies or interviews. It's next to nothing. The two photos used in this article are the only photos that I've found. It's important to document for posterity. Otherwise, this once vital genre will fall into oblivion. And this must not happen. It's hard to tell when, how and where TSS was formed. In an e-mail Jacob Russell explains how the band started out: "Man... in some sense TSS had been brewing for years prior to our "unveiling". Brent and I had been playing music together off and on since 1998. We were both in a rap-core band when we lived in Missouri, if you can imagine that. He played guitar and I did vocals. We were building momentum when I decided to leave the Midwest for Oregon. Brent came out about a year later and stayed. We both got married to girls who have been friends since they were toddlers so we all always hung out. We would drink beer and jam pretty much every time. We were both writing songs but usually on our own (or me with my wife) as we were exploring different styles centered around the acoustic. Brent, being the gifted musician he is, was exploring different instruments, branching away from the guitar. One evening (I think this is how it went) after dinner and a few drinks, we were playing around when Brent came up with a little riff on this mandolin he purchased a few weeks prior. It was so fast, like metal (that was a big influence on him) I didn't know how to keep up. So, I just banged on the acoustic trying to fill in some space. That little session became "Thoughts on Life". We were pretty excited and started collaborating more and writing together more and more. We realized we could add all of our influences together and play essentially dark rock on acoustics and it might be unique." The band name comes from a line in the Kelly Joe Phelps song "Roll Away the Stone": "Two-step slumber come on lead my eyes, lead me I wanna go. Two-step slumber come on lead my eyes, I wanna go teach me Lord that righteous way teach me ...". Brent Greiwe came up with the idea. Two Step Slumber formed, flourished and vanished. The band broke up in 2010. In the e-mail Jacob Russell writes: "We disbanded for a number of reasons. Some were disagreements on how to continue, some was a kinda burn out. I was starting a family and the dynamic changed, that had something to do with it. There was a lot going on, let's leave it at that." 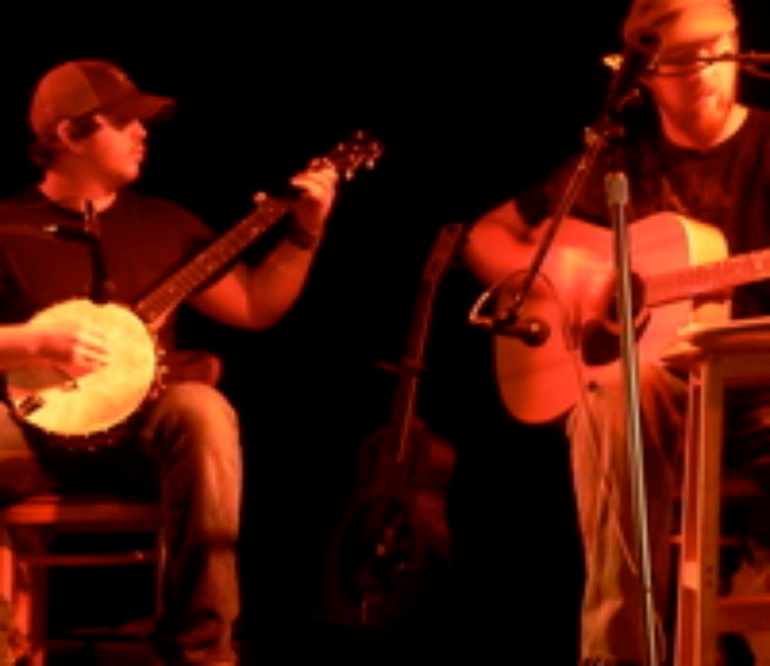 Most bands/artists in the "gothic country" genre follow a standard formula when it comes to their creative process, for example idea/theme first, then lyrics followed by arrangement and chords or some other order or process. In the email Jacob Russell describes how the songwriting process looked like: "A lot of the songs came out of jam sessions. I would through out fragmented lyrics or hum while we played to get an idea of how to sing. Brent came up with most of the riffs. I acted more like rhythm (bass was my first electric instrument) but would come up with a few things here and there. My goal with the acoustic guitar was fill in space or substitute the low end. It's why I played the guitar I did. It had so much low end." In the email he develops his views on the creative process when it comes to finding themes, moods and expressions for their lyrics: "Most of the lyrics were just me working out existential problems, religious ideas, or sometimes just dramatizing ordinary situations. I made everything more dramatic on purpose because I'm a fairly secretive person and didn't want people to know my mind. Plus, there's a type of craft, I believe, in transforming mundane situations into something more symbolic. I was also battling with nihilism. You probably can't tell because most of our songs weren't recorded but if you listened from the earliest to the latest, I going very dark in my ideas. It's probably another factor in our disbandment."

When business is slow at the Embassy I sometimes get engaged in counterfactual thinking, the human tendency to create possible alternatives to life events that have already occurred; something that is contrary to what actually happened. What if TSS had soldiered on just a bit longer? What if they had released an album? What if they had marketed themselves slightly better? Of course, we will never really know, but we can make an informed speculation. I think it's safe to say that TSS would have become more known to a larger audience and also achieved a far more prominent position in the genre. However, this is more of an assessment than a prognosis. What I particularly like about TSS is the distinct dark gothic streak in their songs. It goes without saying that their gloomy approach withstands all authenticity tests in this fake and mannered world. I also like the notion of being gothic without seeking to be it. The band didn't start trying to be gothic or western or folk (or a combination of the three attributes). It was late in the process that they found out that there was a genre in the gothic country style and that they probably were an integral part of it. However, it didn't lead them to fame and fortune. One explanation is probably the modest ambition level. Doing things together because it's fun isn't rewarded in the music industry in general or in the gothic country genre in particular. In the email Jacob Russell writes about the initial ambitions: "Who really knows the heart? We each had our own secret desires, I think, but really, I think we both would agree, that we loved hanging out, drinking some beers and playing music together. I've never been able connect with anyone musically the way I could with Brent. We had chemistry. We listened to each other and responded to how each other was playing. It was like we shared the same soul when we played together. So many times I would launch into something and go off the cuff and Brent would just know what I was doing. It was surreal." Jacob Russell and Brent Greiwe still have contact and their families see each other now and then. Often they slip into to a jam-session. Time flies and a lot of water has floated under the bridges. Brent Greiwe has gotten proficient in the art of engineering. Jacob Russell doesn't listen to much music nowadays. Other interests like philosophy and theology have taken over.

In the email Jacob Russell shares his thoughts about the future for musicians/bands in the "gothic country" vein: "I have no idea. In some sense, this world hates tradition. It's obsessed with progress and newness. In a culture like that, traditional music becomes a novelty and novelties fade and are forgotten. That being said, I have respect for those who fight against this modern world and adhere to past notions. I tend to lean towards tradition more and more. I still am quite fond of this "gothic americana" genre and am humbled TSS is remembered within certain circles. I'm on the periphery looking in but I've noticed a few good projects. The landscape we are navigating has inverted. We live in the upside-down. Strangely enough, I think this will be both an undoing and a healing. But that's another topic all together."

TSS wanted to release their untitled album. But, instead they disbanded a couple of months after the recording. That's life. Despite that, the "untitled album" is available here and there on internet. There are plans of releasing it digitally on Bandcamp. The two have also played around with the idea of re-recording the songs and releasing them. Who knows. Plans are just plans in the gothic country genre. There are so many things that must be fitted within the limits of family, work and other duties. We should be truly thankful for what they gave us.