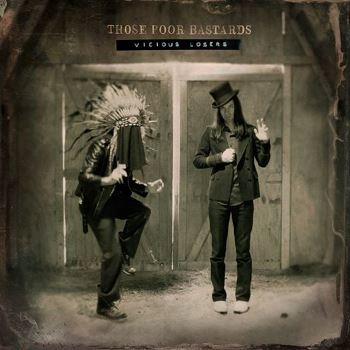 Today is the official release date of Those Poor Bastards' new album "Vicious Losers". Since I pre-ordered the album and Tribulation Recording Co. is a fleet-footed and effective company I've had the opportunity to listen to it for a couple of days. Those Poor Bastards has been very successful in maintaining a high quality throughout their albums, without repeating themselves. The new album is no exception. It has the usual and desired properties (that is) dark and gritty, but yet playful and ironic. At the same time, the approach feels fresh (in contrast to the adjective rotten which they probably are more comfortable with). Many bands in the genre have, alas, switched to a softer sound over time. However, Those Poor Bastards seems to go in the opposite direction. In my opinion, with "Vicious Losers" they raise the bar for extreme death country. The album starts off in an intermittently and cacophony manner with "I Am Lost" with rowdy guitar riffs and bass lines, pounding drums and frantic vocals. The mood for the album is hereby set. The second track is "Getting Old", almost overly hard played with ultra-distorted guitars and roaring vocals "Why is my skin melting like wax, Why is my hair so grey and thin, You're getting old buddy, Noooooo!". The third track on the album "Let Us Rot" has the classic TPB characteristics: catchy, seductive and morbid. The next track on the album is a joyous sing-a-long "Give Me Drugs", where TPB explores a number of uses and purposes for drugs. The fifth track "All Dolled Up" is a warbling piece built up with rolling bass lines and hilarious lyrics, which actually makes you wanna dance (or at least move your limbs). The track "The Lonely Man" starts with "Time for some sad stuff, honey". In this song Those Poor Bastards return to a more traditional country expression, if it wasn't for the sad and inconsolable lyrics, manifested in sentences like "I eat my dinner alone". And it gets worse. The track "Strange Dark Night" is not a bad song, it just don't stand out like the other songs on the album. The best track on the album is without any doubt the catchy "Born To Preach". "I was born to preach the gospel, And I sure do love my job". Zebulon Whatley from Sons of Perdition plays banjo, bass, slide guitar and contributes with backing vocals. The ninth track on the album, "Big Trees" is very short, only 49 seconds, but Those Poor Bastards really knows how to tell a story effectively. Big trees can, among other things, protect you from the terrible sight of neighbours. The song ends with a wish for trees to grow mighty and tall. In the next track "The Only Time" TPB tells a story where the protagonist only has any fun when he is either drunk, stoned, cheating, hurting, praying or stealing (in that order). There's, of course, a moral in it. Another great track on the album is "Trouble At Home" which has the usual TPB beat and groove, but with reggae guitar chords (!). The lyrics are quite accurate as always. The lament "I don't want to be no square" [a fate worse than death, my remark] is repeated in the lyrics of the next to last track "Loser's Prayer". There's loads of lonesome banjo picking on this track. With TPB standards it's melodic. My only negative criticism is related to the last track "Today I Saw My Funeral" which is almost eleven minutes long. It's long. The things Those Poor Bastards have to say in a song are usually said in three to four minutes. "Today I Saw My Funeral" is built up of fragments of vocals, air raid warning, telephone signal, piano strumming, radio static and other sound effects. In my opinion, the concept is not sufficiently worked through and the song doesn't meet their usual high quality standards. With that being said, "Vicious Losers" is a very good album. In fact, as many as five songs qualify for my compilation, which you can find here in the main article about Those Poor Bastards. With this album Those Poor Bastards retain their leading position in the "gothic country" genre. "Get ready for the gloom". You can order the album here.