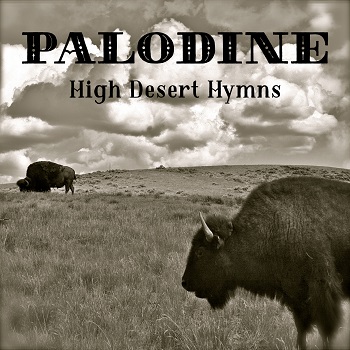 Music creation isn't the same as music production. The latter part presupposes the former part. For some people music creation is a painful process, while for others inspiration comes naturally and in abundance. Palodine has always written a lot of songs to each album. While music creation is more or less unproblematic, music production is often unpredictable and surrounded by difficulties. It's hard to put out an album even if you have lot of good material. Palodine is a good example of that. Over five years elapsed between the second and the third album. The explanation was brutal structural rationalization in the music industry. Both record labels they were involved with closed down and they didn't have the funds to release the third album themselves. Thanks to a patron they could release "All the Pretty Wolves" in December 2013. Now Palodine are back with their fourth album "High Desert Hymns". According to Palodine: "This record is not as heavy as some of our past work. There is some more delicate, layered songs in the mix this time". Normally, this kind of statement is extremely worrisome. In another context this is an euphemism for not as good as previous work. Many thoughts ran through my head. Have they "matured" and become a husband-and-wife soft duo? It can't really be that bad, can it? Palodine is one of the hardest bands in the gothic americana genre, so how gentle and subdued can it get?  The questions will be answered in the end of this review. The new album "High Desert Hymns" is approximately 45 minutes long and contains ten songs. The album artwork is, like previous albums, designed by Katrina Whitney. According to the press release: "Themes of hypocrisy, enlightenment, violence, spirits, redemption and death still permeate, while short story narratives laden with desert imagery are introduced." You can buy the album in the format of your choice, just click on one of the icons (bottom left). Physical cds will be available through cdbaby. 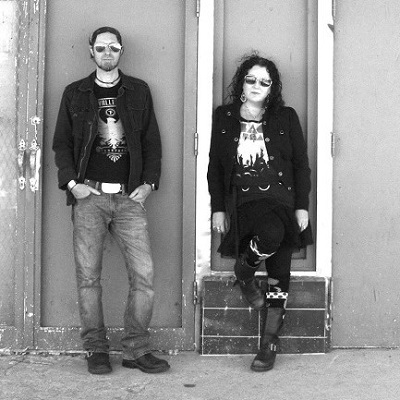 I will now quickly walk you through the album. The first song is "Holy Roller", which is a disparaging term for spiritual fervor expressed by shouts and violent body movements. The song starts off with lonesome banjo playing, pounding drums and suggestive choir. The lyrics are ironic "Shake the Holy Roller/Shake a little harder". The song has all the typical trademarks of Palodine. There's no sign of "not as heavy as some of our past work" in this song. The second song is "Lay the Crossbow Down". It's not as heavy, but has a distinct rhythmic beat and, last but not least, a very beautiful vocal part that starts 1,55 and ends 2,35 minutes in the song. The third song "The Hunter" is dreamy and naturalistic. The song is built up around the vocals, sparingly orchestrated and ends abrubtly after some guitar playing. It isn't a bad song, but it doesn't reach the same level as other songs on the album. The fourth song "Animal Eyes" is a complex and varied song with many tempo changes or, in other words, songs in the song. It doesn't have the same characteristics as other Palodine songs. The fifth song "Light Above the World" is without any doubt the best song on the album. You immediately realize the greatness of the song. The song unfolds slowly and majestically for four and half minutes. The instrumentation and vocals are exquisite. If there against all odds where such a thing as a hit in the gothic americana genre, this would be it. 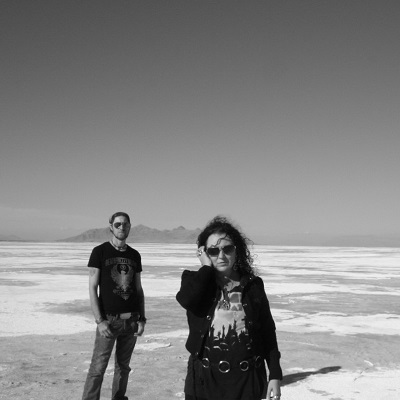 The sixth song "High Horse" is the weakest track on the album. It's not a bad song as such. In fact, I like the structure, but I think the rhythm in the refrain is too jerky to fit in the song. Besides, I need to find something to complain about. The four last songs on the album are all very good. And that's really good news. I find it very disappointing when too little effort have been put in to maintain the level of quality throughout an album. I'm very pleased with the completion of this album. The seventh song "Abraham" starts with the familiar sound of vinyl crackle before a slow banjo- and guitardriven accompaniment takes over. The lyrics are predictive: "When Abraham came down the mountain/No one could see it coming". You don't hear concert bells too often in the gothic americana genre, but here is one good opportunity. The eight song "Amargosa" is a slow, elevated and dreamy song with beautiful vocals. The song is perfectly arranged and calibrated. The ninth song "Eagle and the Serpent" is enigmatic, dark and brooding. It's a long song, almost six minutes. It's also a complex and varied song with many tempo changes. The refrain is very evocative. The tenth and last song "High Desert Hymns" is seven and half minutes long. There's a distinct tempo shift after 4,50 minutes in the song. The last song on an album can't be a filler. The last song concludes what the artists want to say with the album. The song "High Desert Hymns" meets these high standards.

And finally, the overall assessment: The album is set out to be not as heavy as some of their past work. I completely agree with this assessment. The new album is more subdued and definitely more polished. But, the difference shouldn't be exaggerated. This is still hard stuff, only with a slightly lighter touch. My concerns about "not as good as previous work" are unfounded. However, I prefer their harder sound. Palodine knows how to produce an album and the new album is no exception. Their trademark is a full-bodied soundscape with many instruments, care in details and entirety. The new album stands up well in comparison with their previous albums. There's more music from Palodine on its way. A new album will be released in January 2016. They will be back with a harder sound on this album.