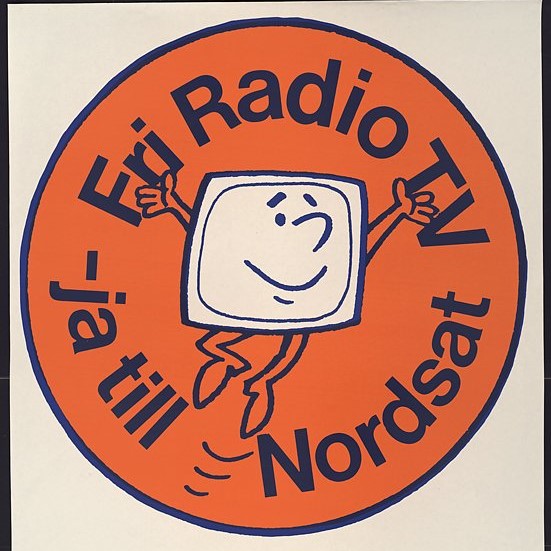 I grew with a TV and radio monopoly. We were entrusted with two TV-channels and three radio channels by our popularly elected. That was it. A had strong beliefs at the time. We were being incapacitated by our politicians. The monopoly should be deregulated. This was circa 1980. It may be hard to imagine, but during my senior year in high school I walked around in pea coat, crew neck Alan Paine cardigan, Lacoste tennis shirt, Dexter loafers and wore checkered golf pants (never held a golf club in my life). I hadn't found my inner voice, ha ha. As a political statement I wore an orange lapel pin (see image, translation: "Free Radio TV - yes to Nordsat"). The orange lapel pin requires an explanation. Nordsat was one of many collaborative projects between the Nordic countries. The idea was to let the residents in the Nordic countries take part of each other's broadcasts. However, the majority of the body considering the proposed legislation were negative. Zapping, low quality and, last but not least, the risk of being exposed to TV commercials (already allowed in Denmark and Finland) were the main arguments for saying no. The only thing that remains of the project is the Tele-X satelite. The satelite was state of the art in 1989, but became space junk in orbit in 1998. I was convinced of that a deregulation of the monopoly would mean diversity, quality and evolution. About the same time Pink Floyd’s masterpiece "The Wall" was released. In "Nobody Home", the character Pink describes his lonely life of isolation. "I've got thirteen channels of shit on the T.V. to choose from". I didn't see it coming. However, the wheels were in motion. On cold winter nights my then girlfriend (very nice and preppy) and I listened to Radio SUS (legendary student show on community radio) in her pleasant parental home by the lake. The SUS take on broadcasting was fresh, energetic and anarchistic. A couple of years later, during my university studies, I got involved in student radio. You had to save a cassette copy of the broadcast for legal purposes. Thankfully, I was never prosecuted. I tried to live up to the SUS standards. It was really fun. However, after a while I found out that there was no demand for any freshness, energy or anarchism. On the contrary, some influential people within the student radio organization exerted mild pressure. "You are supposed to play the music the record companies send us for free or otherwise they will stop sending them and we don't want that" and "We strive to make our broadcasting more professional and we will therefore set new requriments for the staff's mixing skills. Think of it as your driver license". I never played promo music or got a license. I began to see it coming. Money always beats politics. And when we do things in Sweden we tend go from one extreme to another. In short: "Now I am become death, the destroyer of worlds." Destruction came. Cable TV was introduced fast and furious. A new Swedish commercial television network, TV4, started to broadcast on the terrestrial network. And what did we get in the name of freedom of choice? Commercial breaks every five minutes, game and cooking shows, B, C and D celebrities thinking out loud, reality shows, sob-and-cry shows and a horny variant of Farmer Wants a Wife. The format was later expanded to another profession, priests. It virtually exploded in our face. The public service TV channels were contaminated by the new competion. Their mission was - and still is - public service, but it's impossible to distinguish their program selection from commercial TV. It's a race to the bottom. Rock bottom. The public service radio channels also experienced fierce competition. Human beings were replaced by cd changers and pre-recorded jingles and commercials. However, the public service radio channels have hibernated and survived by holding on to strong guiding principles. To sum it up: diversity became insularity, quality was outnumbered by quantity and evolution was overthrown by revolution. I should have seen it coming. Now I'm sitting here, remorseful, and "I've got thirteen channels of shit on the T.V. to choose from". It's possible that I subconsciously do penance by running this website. Anyway, forgive me.