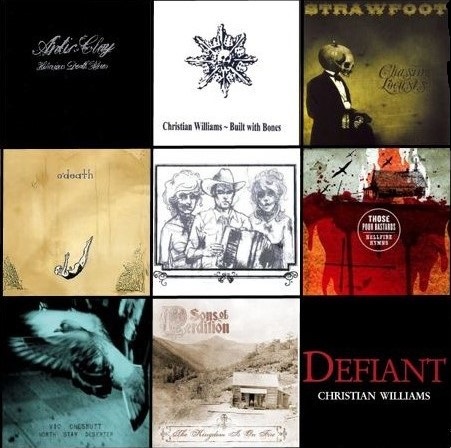 We are some years inundated with great music albums. Other years are just filled with waiting. Nobody has yet been able to explain the population fluctuations in lemmings and there's no authoritative explanation of the abundance of great music albums in some specific years. It's just a fact of life. For example 1973 was a golden year: David Bowie - Aladdin Sane, Pink Floyd - Dark Side of the Moon, Led Zeppelin - Houses of the Holy, Frank Zappa - Over-Nite Sensation, Elton John - Goodbye Yellow Brick Road, Alice Cooper - Billion Dollar Babies and Muscle of Love, Bruce Springsteen - Greetings from Asbury Park, NJ and Black Sabbath - Sabbath Bloody Sabbath among others. The corresponding year for the "gothic country" genre was 2007: Antic Clay - Hilarious Death Blues, Christian Williams - Built with Bones and Defiant, Strawfoot - Chasing Locusts, O'death - Head Home, Those Poor Bastards - Hellfire Hymns, Slackeye Slim - Texas Whore Pleaser, Sons of Perdition - The Kingdom is on Fire and Vic Chesnutt - North Star Deserter among others. This year was really Annus Mirabilis (an amazing year). However, in my darkest moments I think that the best years have come and gone. A person with a more relaxed attitude towards the genre would probably say that this is a normal feeling that comes with age. But, I do worry. There's a peak in the lemming population every three to five years. Many great lemmings are born every year. The same can not be said for the regrowth in the "gothic country" genre. There are not many new artists and bands that holds a sufficient high quality and stand the test of "authenticity". Hope is the only good god remaining among mankind. Let there be another year like 2007. Let's hope for the best and plan for the worst.