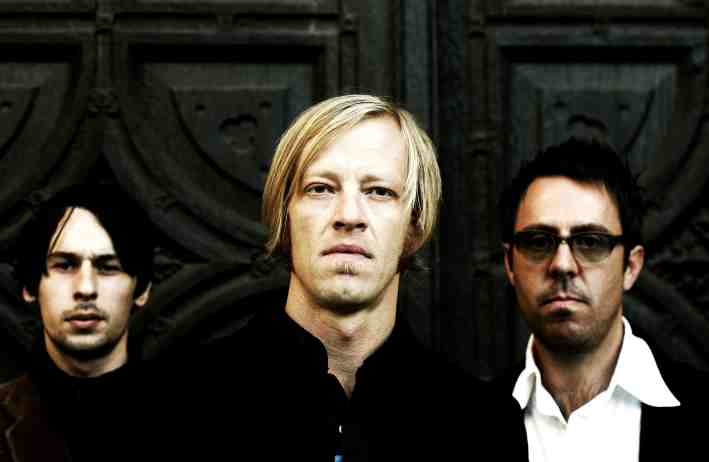 Wovenhand (in the beginning known only as Woven Hand) is a band from Denver, Colorado, see website Wovenhand (Woven Hand) refers to two hands clasped in a prayer (a very obvious Christian reference). Wovenhand also refers to weaving (Indian weaving art occurs on several album covers). The name has also other meanings. Wovenhand started as a solo-project by David Eugene Edwards (hence DEE) under 16 Horsepower’s hiatus in 2001. 16 HP had toured very hard for several years which put a strain on the band. They had to devote more time to other things. Tola focused on raising horses in California and Humbert focused on his ranch in Colorado. They were also committed to their own band, Lilium, which started in 1984. For David Eugene Edwards, however, a hiatus meant a loss of income. In an interview for Splendidezine in 2004 David Eugene Edwards explains: “But I don't have a source of income other than playing music, so I can't afford to take a year to do anything. I had to keep working, so I just started writing songs. I was playing shows around town, basically. I called it Woven Hand. I ended up making a record, recording the songs, and the record company wanted to put it out and people responded well, so I just started touring. It took on a life of its own in a way. Some people think that it's an opportunity for me to say the things I want to say but can't as a part of 16 Horsepower, but that's not the case at all. There's no difference in the way I write the songs, the lyrics or music. It's just me being in charge, basically, and doing everything, rather than having those other personalities there.” In 2000 there were speculations of a break-up of 16 Horsepower when the members focused on solo and side-projects. In April 2005, 16 Horsepower announced their break-up. According to their website: “an accumulation of differences, mostly political and spiritual, separates them and prevents them from going any further. Lilium and Woven Hand will remain active.” 16 Horsepower, Lilium and Wovenhand coexisted for four years. Their side projects had crowded out their main project - 16 Horsepower - the mother of (almost) all “gothic country” bands. 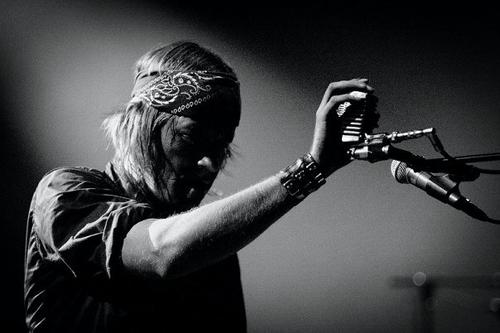 Wovenhand has many labels “gothic americana”, “gothic country”, “gothic folk”, “psychedelic folk”, “neofolk”, “avant folk”, “folk rock” and “native American music” etc. DEE has declared that the music of Wovenhand very well could have been made by 16 Horsepower. Maybe this is true in a formal sense (DEE writes the music and lyrics for both 16 HP and Wovenhand), but perhaps the difference is that’s it’s just a little bit harder to pursue ideas within 16 HP than when you’re alone. However, there should be a clear difference between 16 HP and Wovenhand. DEE started Wovenhand as a solo project. Why should he make the same music under two different names? It doesn’t make any sense. In his solo-project Wovenhand DEE takes the 16 HP-concept a bit further and into unchartered waters. The music is in a way somewhat harder, sheerer and darker and more beautiful than 16 HP. It's hard to explain. Sometimes Wovenhand is described as a more personal and intense experience than 16 HP. The vocals are less nasal and more restrained. The music is very "Gothic". My son says that if he were to choose music for a computer game in the horror genre, he definitely would choose Wovenhand before any other band.
After their fourth (of total eight) studio albums Wovenhand moved away from their introvert and enigmatic sound towards a much harder sound. The music of Wovenhand has become harder and harder with every new release. I prefer their introvert and enigmatic style, but it's still Wovenhand to me (and of course I will continue to buy their album no matter what). DEE has a strong integrity (which is a rather unusual quality these days). DEE could perform alone with a banjo or with full band (and then I really mean a full band as in “we will run over you”). DEE could play in front of 50 people in Podunk, Nowhere (US) or in front of thousands of people in Europe (like 16 HP, Wovenhand has a very strong fan base in Europe). DEE does what DEE does and that’s it. While other bands release new albums and dutifully play a couple of songs from the new album before giving the audience what they really wants, DEE follows his own beliefs and convictions. In an interview for ChicagoMusic.org David Eugene Edwards explains:”People will ask, “Why don’t you play that song anymore?” and I’ll say, “Because I’m not in that place anymore.” I don’t sing those words anymore because they’re not true to me anymore. I understand them and I like what I did, but I’m not interested in recreating it.“ In my opinion, this is artistic integrity at its finest. 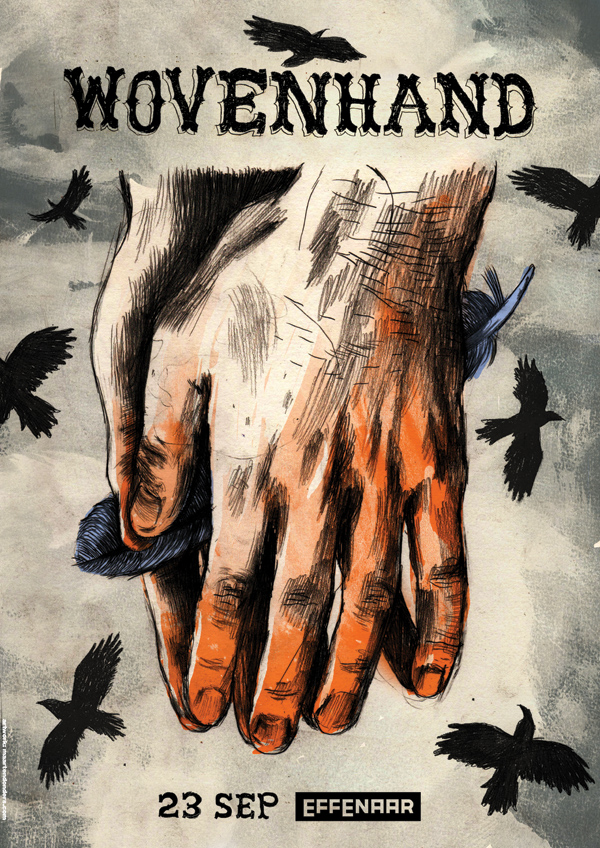 As pointed out in the article about 16 Horsepower David Eugene Edwards is deeply religious. All people, without exception, are evil. Only God is good. DEE religiosity has not diminished over time. On the contrary, in some interviews DEE explains that the more he discovers God the more he understands how much he need Him. DEE doesn’t preach in his songs, only reminds people that God exists. God is a very strong force in DEE creative process. In the interview for Splendidezine DEE explains his view on music as a concept: “It's something that God has created for us to enjoy, for one, as an art, just like all the other arts that He has created, and also to relate to Him with, and relate to each other.“ As in the case of 16 HP we are not talking about “Contemporary Christian Music”. The lyrics are strongly influenced by Christian imagery and deal with internal struggle, love, sin, redemption and punishment. There are no subtle, indistinct euphemisms or tortuous formulations in the lyrics: "Hail Hail Hail/The high king of heaven/Christ Jesus ruler of all" or “Go into the Lord's house/And go in a mile/The world will bow/The knees will be broken for those who don't know how/He delights not in the strength of horses/ He takes no pleasure not in the legs of men". The message is pretty clear. However, Wovenhand’s fan base doesn’t consist of the “Contemporary Christian Music” community. In fact, their fan base consists of church outsiders and people interested in the darker sides of life (and death, for that matter). You might think that DEE thinks highly of himself. On the contrary, DEE hasn’t got any skewed perception or grandiose personality. In an interview for Paste Magazine in 2008 he puts things in their proper context: “What God makes is what is going to stand and not what I make. These songs that I make will not endure.” DEE is constantly exploring new paths and moving in new directions. In the interview for Splendidezine David Eugene Edwards explains: “I'm thankful that I keep having ideas. Being able to record the way I do, without pressure and without time restrictions, I can do whatever I want to do. I'm really thankful that I can, and at the same time, make a living at it. Most of the ways that people work with music and market music and do it, I don't really fit into any of these categories. None of the things really work. I'm not a marketable product.” 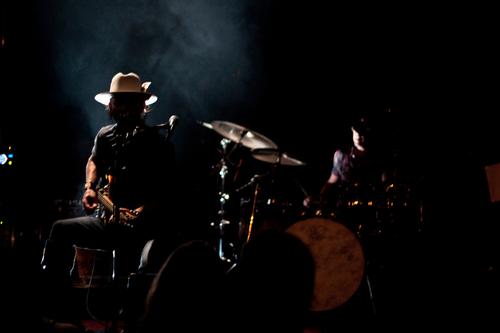 In 2011 Wovenhand released a compilation album called “Black Of The Ink” which contained a 110-page hard-cover book including the complete lyrics from the albums “Woven Hand” to “The Threshingfloor” and illustrations by DEE. “Black Of The Ink” also includes a six-track disc (one track from every Woven Hand album to that date), of which all was reworked and re-recorded exclusively for the compilation. On their US record label (Sounds Familyre) homepage, DEE makes the following statement: "The myths of our country are in the songs. The untold stories and gaps in history books are in the songs – our recollection is preserved in this music. Those songs as well as the stories that my parents told me, the bible and the books I read, all this is the foundation of my imagination of America. But I do not see myself as a keeper of tradition. I rather am a craftsman who on a daily basis does what he does best: singing and playing guitar. That’s the only thing I‘ve learned. I am following the music. So when I sing about my own experiences they are always influenced by America. And America is a vast country. And America is always the beginning of an idea.“ Their ninth album “The Laughing Stalk” was released in 2012. The lineup consisted of Chuck French (guitar), Ordy Garrison (drums), Gregory Garcia Jr. (bass) and Jeffery Linsenmeier (organ). This lineup was regarded as the most heavy incarnation that ever existed of Wovenhand. But this assessment was made before their tenth album. Their tenth album “Refractory Obdurate” was released in 2014. The lineup consists of Ordy Garrison (drums), Chuck French (guitar) and Neil Keener (bass). In my opinion this was the  hardest album and also the hardest incarnation that ever existed of Wovenhand. And last, but not least. Their eleventh album "Star Treatment" is hard on the verge of unlistenable. Their enigmatic soundscape is long gone. Some people argue that the Wovenhand solo-project converged into a full band somewhere around the release of "Ten Stones". I beg to differ. In the interview for Splendidezine David Eugene Edwards explains: “But it's not really a band, per se, Woven Hand -- it's kind of whoever's playing at the time. It's kind of set for the dance company, but outside that, I play with other people or sometimes just by myself or one other person.” The twelfth album "Silver Sash" was released in 2022. The rotation of people playing in Wovenhand has always been high and DEE writes all the music and lyrics. In my opinion, it’s a solo-project no matter how you look at it. Without David Eugene Edwards there’s no Wovenhand.

Below is a suggestion for a CD-compilation. It was very hard to make a CD compilation. First, Wovenhand has released eight solid albums and many great songs, and secondly the songs are usually rather long (5-6 minutes) and thirdly the songs are highly contextualized which requires smooth transitions between albums (else it gets blunt and unceremonious). An overall assessment led me to the conclusion to make a 3-CD compilation.