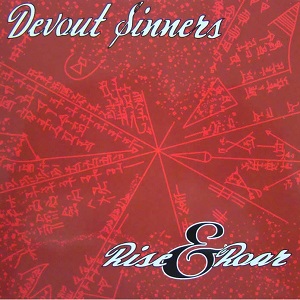 Without any illusions or high expectations I went through the monthly trawl of new music (in the sense new to me). For the most part there’s nothing in the trawl worth listening to. In my darkest moments I think that the best years have come and gone (which is probably very true). But then it happened. I discovered Devout Sinners from Normal, Illinois and suddenly there’s hope for humanity again. If I had discovered them earlier they would almost certain have been included on my list of "10 essential "bluegrass" albums", read more here (opens in a new window). Devout Sinners was formed in 2011 and looks like a bunch of heavily tattooed bikers disguised as bluegrass musicians, but they're probably very nice. I also managed to get a hard copy of their debut album “Rise & Roar” released in 2012. However, the running time is only 28:35 minutes. The fast pace makes it feel even shorter. Devout Sinners play "Bluegrass" in the same vein as .357 String Band, Highlonesome, Carrie Nation & the Speakeasy and similar bands. However, these "bluegrass" bands don’t deal with “condescendant corporate whore” (Rise & Roar), sexual assault (Preacher Man) or sample stereotypical female intercourse moaning to underline the message that no one will love Luci like the protagonist do (Sweet Luci). Furthermore, they sample James. G. Gerard's speech in 1917 "I know it is hard for Americans" and John F. Kennedy's speech in 1962 during the Cuba Crisis (Patriots). Obviously, someone has to be the frontwalker. Their lyrics deals with social awareness and social criticism with a distinct bite. Devout Sinners consists of Andy Blick (lead vocals, bass), Zack Blick (vocals, banjo), Ron Huffman (vocals, guitar) and Karl Borling (mandolin cello and kazoo). Trivia: the bass is built from an old gas tank almost given away for free when the scrap yard owner found out that the tank was going to be a experimental music instrument. I read on their Facebook page that they put the band on hiatus or something close to that, which is bad news. The statistical return rate from hiatus is not encouraging in the genre. But as always, let's hope for the best and plan for the worst. Whatever happens, they gave us Rise & Roar.