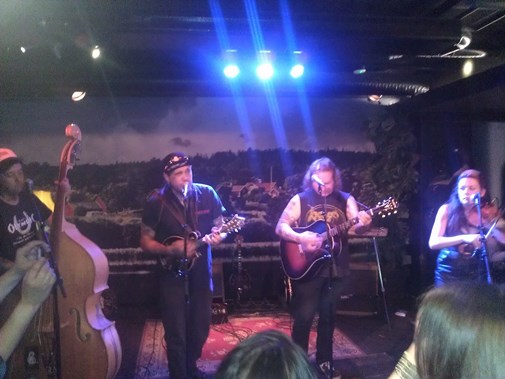 On May 22 2014, Jayke Orvis & the Broken Band announced the start of their European Tour on their FB-page. The sad news was that this would also be the last tour for the Broken Band as we know it. You have to face the facts. "Nothing lasts forever. Even the longest, most glittering reign must come to an end someday." James Hunnicutt (guitar) will continue with his solo act. Jared McGovern (upright bass) and Liz Sloan (fiddle) will be moving forward with the Urban Pioneers. Jayke Orvis will almost certainly return with a new line-up of talented musicians. But will he ever be able to recreate a band that can match this line-up? In my opinion, it’s not possible. The line-up with James Hunnicutt, Jared McGovern and Liz Sloan is without any doubt the ultimate “dream-team”. Not only as individual musicians, but also in the way they interact musically on stage. Tonight, I had the privilege to see Jayke Orvis & the Broken Band play at Club Nuggets in Stockholm, Sweden (see picture right). On their FB-page they wrote: “we've hit it hard since day one, and we feel like the right thing to do is go out with a giant bang instead of a sad love tap.” And they didn’t go quietly into the night (however the sun sets 10.01 PM this time a year). On the contrary - as promised - they went with a giant bang. They played hard like there was no tomorrow. Jayke Orvis & the Broken Band are so talented, experienced, perfectly attuned and without any tendency to idle. They never lose their commitment. The songs that linger on from this evening are: Shady Grove, Feelings Like This, Dreadful Sinner, In The Pines, Raise The Moon and Lead Me Astray. After leaving the venue, I thought about how different band splits can be. Sometimes, it’s a very bitter end with infected disputes about the musical direction, ambition level or money (however, there’s not much money, if any, in this particular genre), harsh words that never can be taken back, things that should have been said, but never was or just getting very tired of each other. It’s therefore really encouraging to see Jayke Orvis & the Broken Band split up in such a friendly way (but still with a giant bang).