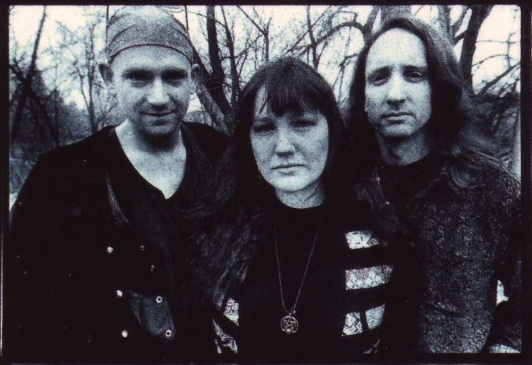 The Shivers is a band from Austin, Texas (during their heydays they were based in Minneapolis, Minnesota and then relocated to Portland, Oregon). The band was formed in 1989. The term "Gothic Country" was used for the first time as a label for The Shivers, which of course gives them a place in the Gothic Country Hall Of Fame" (if such a establishment should exist). The band apparently owns the copyright to the name "The Shivers", but it does not seem to play any major role. Infringements of copyright are many and severe in this case. The Shivers should not be confused with a couple of other bands (this article refers to Artist ID P 141557 on ALL MUSIC GUIDE). The Shivers consists of the married couple Carey Kemper (vocals, guitar and violin) and Kelly Bell (vocals, bass and acoustic guitar). The band also included a drummer, Barry Haney. Some additional musicians participated on the first album. The Shivers toured widely and continuously. The band's real home was a Recreational Vehicle, RV. Kemper’s and Bells three children were homeschooled. You can’t but admire The Shivers for their commitment and priorities. No compromises for the sake of art.

The Shivers have released two albums ”The Shivers” (1994) and ”The Buried Life” (1996) on Restless Records in the U.S. and on Glitterhouse Records in Europe. Both albums (Restless version) are out of print and extremely hard to find. The European version (Glitterhouse) can however be obtained in used condition. "The Shivers" and “The Buried Life" albums (the Restless versions) are safely placed in my record shelf. The albums were recorded by Tom Herbers in his studios in Minnesota (Third Ear Studios) respective in Portland (Dead Aunt Thelma’s Studio).

The music is not excessive "Gothic Country". It’s fairly straight Americana mixed other influences, particulary country-rock. However, the lyrics have a dark streak undoubtedly makes it "Gothic Country". The songs are grim stories embedded in beautiful music. It’s very deceptive and highly effective. They were "playing and singing each note as if the wolf was permanently at the door". Kemper and Bell both wrote the songs and sang alternately on the albums. Their vocal abilities outshine most of the genre. Carey sang mostly on the upbeat songs (upbeat by "Gothic Country" standards) and Kelly sang on the more downbeat songs.

In 1997 Restless Records released all their artists from their contracts and changed business concept, signing primarily hip-hop and rap artists (oh my God!). This action is simply not acceptable or even possible to forgive. This seemed to become the deathblow for the band. Shortly after they had played at the North by Northwest Music Festival (NXNW) in October 1997 Portland, Oregon in October 1997 the band was disbanded. Despite only two albums The Shivers have left a lasting imprint on “Gothic Country”. The band was an early and important precursor in the “Gothic Country” world.