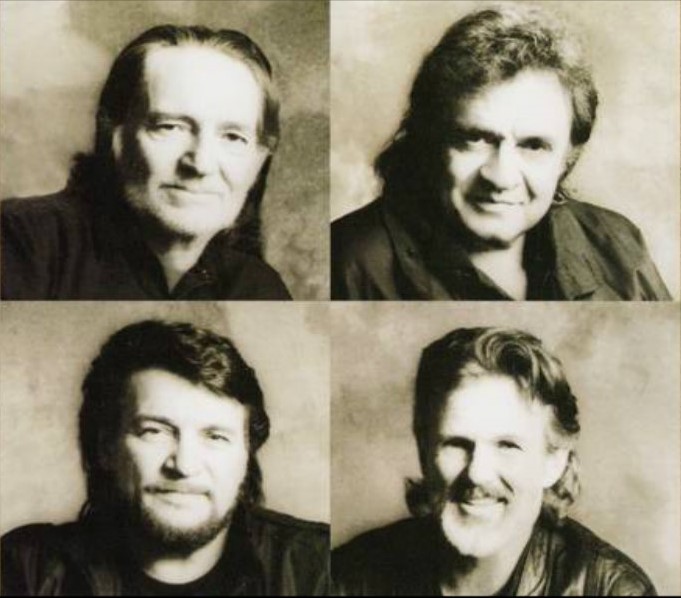 The term "supergroup" has a certain committal ring to it. Usually used in the context of rock or pop music. The Highwaymen (see picture right) was a supergroup in the outlaw country subgenre between 1985-1995. Outlaw country or not, there are worse country genres and my interest lies within the broad "gothic country" genre. Is a supergroup within the "gothic country" genre inconceivable? In this blog entry I will investigate the prerequisites and the difficulties. Let's start with a definition. A supergroup usually refers to a music group whose members are already successful as solo artists or as part of other groups. The prefix "super" indicates that the members should be the cream of the genre. Supergroups are sometimes formed as a side projects and not intended to be permanent, while in other cases it will become the primary project of the members. The durability of a supergroup is rather short. I would also like to add another important aspect: if the decision to join the group is based on musical considerations or as part of a retirement plan. The term "supergroup" is widely misused and it takes very little, if nothing, for a group to be denoted "supergroup". Of course, in this blog entry I apply an orthodox interpretation of the term which means SUPERgroups like Cream, Crosby, Stills, Nash & Young and Traveling Wilburys. So far, the closest to them in country music is the aforementioned The Highwaymen (Willie Nelson, Johnny Cash, Kris Kristofferson and Waylon Jennings). I must admit it's hard not to like them when they play "The Highwayman" by Jimmy Webb: "I was a highwayman, Along the coach roads I did ride, With the sword and pistol by my side, And many a young maid lost her baubles to my trade, And many a soldier shed his life blood on my blade, They fin'lly hung me in the spring of '25, But I am still alive." You almost forgive them for being backed by no less than a smaller army of talented musicians standing in the unlit background at their live gigs. So many musicians on the payroll is really an overkill. The four of them would be quite sufficient. It's in its nature that a supergroup tends to become rather pretentious and pompous. The dynamics of a supergroup follow the rules of a zero-sum game within game theory. For every winner there is a loser and for every gain there is a loss. There are seldom any synergy effects like 1+1+1+1=5. Some supergroup members capitalize on the star quality of other members, while star quality members don't get much in return. I don't think Johnny Cash primarly will be remembered for his part in The Highwaymen. Personally, I will remember him for the six American Recordings albums and the 5 cd box "Unearthed". 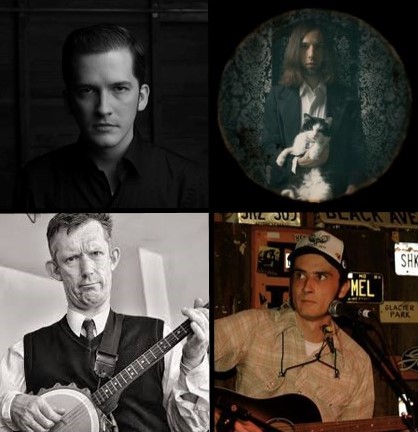 Enough said, who are The Highwaymen of the "gothic country" genre? Let's ignore the obvious contradiction in terms. There's never any "super" and quite seldom a "group" in the genre. However, many are called but few are chosen. The obvious choice would be Zebulon Whatley from Sons of Perdition, Lonesome Wyatt from Those Poor Bastards (and solo in Lonesome Wyatt & the Holy Spooks), Dad Horse (from The Dad Horse Experience) and Slackeye Slim (see picture left). This four-piece constellation is not entirely unrealistic. In fact, Zebulon Whatley and Lonesome Wyatt have collaborated in the song "Blood in the Valley" from Sons of Perditions album "The Kingdom is on Fire" and in the song "Born to Preach" on Those Poor Bastards latest album "Vicious Losers". Zebulon Whatley, Lonesome Wyatt and Dad Horse have also collaborated in the song “Psalm of Nod” from Sons of Perditions album “Psalms for the Spiritually Dead”. In theory and empirically, we already have a strong foundation in this trio. I would also like to add Slackeye Slim as a fourth member to this already renowned lineup. Lonesome Wyatt did the backing vocals in the ultra-catchy song "I Wanna Be Yer Zombie!” from the album "Texas Whore Pleaser", another example of earlier collaboration. That's it, no more and no less. A "supergroup" within the "gothic country" genre is hereby assembled by yours truly. However, there are of course some minor obstacles that must be overcome like the geographical distance (Texas, Wisconsin, Bremen Germany and Colorado respectively). This should not be an insurmountable problem for a "supergroup" worthy of its name. We also need a name of the group, perhaps "Whatley, Wyatt, Ottn & Slim" or something more gothic and spectacular. A second potential obstacle would the differences in their style: doom country, apocalyptic country, keller gospel and gothic western. My assessment is that the differences could be housed within the wide border posts of a "gothic country" supergroup. It's far more that unites them than divides them. A third potential obstacle is that they at the moment are in different phases, paths and lineage. Zebulon Whatley has recently moved forward and expanded Sons of Perdition into a full band in a new and unknown direction, Lonesome Wyatt is untiringly making music with Those Poor Bastards and in his solo-project. Dad Horse is steady rooted in his Keller Gospel genre and tour relentlessly. Slackeye Slim is currently working on his third full-length album with the tentative title "Giving My Bones to the Western Lands". Very likely, Slackeye Slim is moving in a new musical direction. They may be in different phases, paths and lineage, but I like to see this as four biorhytm lines. Sooner or later the lines will coincide. Maybe not as a permanent supergroup, but at least in a one-time-only collaboration on an album or a concert. I'm pretty confident that the law of nature of supergroups will be violated since the nature of law doesn't apply within the "gothic country" genre. In old age (or at least in older age) they would tour and play songs like "The Trickster", "I Wonder", "Kingdom it will Come" and "Vengeance Gonna Be My Name" among other songs. I also like to believe that the would pay homage and play cover songs like "Wayfaring Stranger", "Ramblin' Man" and maybe even "The Highwayman".