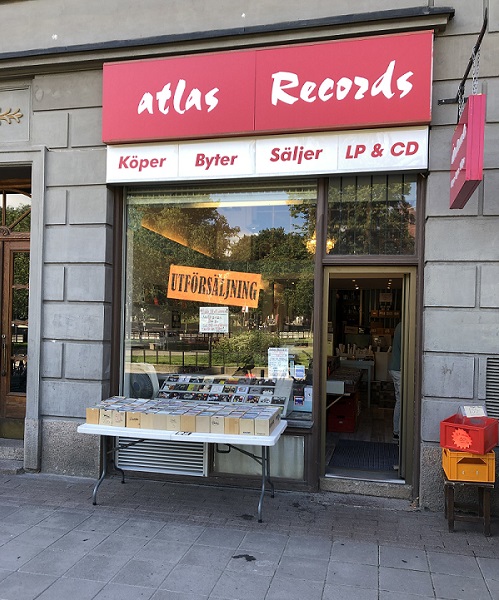 Atlas Shrugged. I'm sorry to disappoint you. This blog post isn't a tedious explanatory note about Ayn Rand's influential book from 1957. Instead, it deals with the closing of Atlas Records (formely known as Atlas CD-börs). The record store in Stockholm was named Atlas since it was located in the block named Atlas south of S:t Eriksplan, between S:t Eriksgatan, Torsgatan and Barnhusviken. The block got its name after an industrial and engineering company, AB Atlas, which operated there until 1927. Atlas had five different locations in the block. First location was at Atlasmuren, and then Torsgatan (two different locations). For over 15 years Atlas had a prime location at S:t Eriksgatan 78. However, a "market adjustment" put a stop to that. The owner of the premises, a housing association, raised the rent with 100 000 SEK a year (11 300 USD). They cried crocodile tears in the local paper. Atlas had on one hand been a problem-free tenant and some of the members in the housing association were customers, but on the other hand the housing association needed to act "in the interest of its members". Self-interest always takes precedence over moral considerations. The new rent was far beyond what a used record store could take. Atlas found a new home around the corner at S:t Eriksplan 5, where it remained until the end. It was only a stone's throw away, but it took some time for old and new customers to find their way there and for the store to regain its former glory. A couple of years ago I wrote a blog post about the rise and fall of record stores, read more here (opens in a new window). It has been all downhill after that. Atlas survived very hard times: illegal downloading, legal downloading, vinylmania and, last but not least, streaming. The virus covid-19 became the straw that broke the camel's back. The economic margins has always been small. You are dependent on a steady (however small) flow of customers. This Tuesday the owner Micke Bofält closed shop and retired. What made Atlas so resilient and viable? First and foremost, a knowledgeable owner and manager. Second, a store kept in an impeccable order (some adjacent cd stores give the concept of chaos a new and deeper meaning). Third, a large variety of offers. I even bought some gothic country cds there. Fourth, moderate and correct prices. Fifth and last, good customer treatment. The S:t Eriksgatan-Odengatan route was known for accommodate the highest density of record stores in Europe. This era is now long gone. The few remaining stores struggle to survive. For example, Skivbörsen has closed until further notice due to covid-19. Atlas Records was without any doubt one of top-three record stores in Stockholm. Atlas was a Titan. The closing of Atlas may not have rocked the world in its foundations, but the end of the block shrugged. The Titan Atlas was namely condemned to hold up the celestial heavens for eternity.