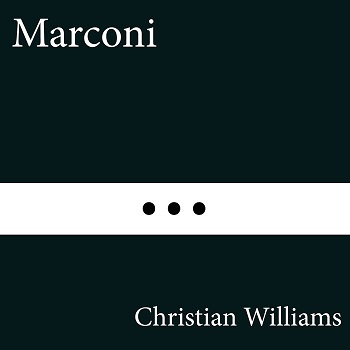 Christian Williams disappeared from the gothic country radar when he completely (in the true sense of the word) changed his musical direction a couple of years ago. His new music sounds like Karlheinz Stockhausen meets Brian Eno. Therefore, I was very surprised when he released an album with tratitional music a month ago. You can listen and buy the album digitally in the format of your choice at Bandcamp, just click here (opens in a new window). The price is set according to the "name your price"-principle. The title is a nod to Guglielmo Marconi, the Italian inventor and electrical engineer known for his pioneering work on long-distance radio transmission. The background to the album idea and the title are as follows. Christian Williams prepared a set list to a solo show in Lawrence, KS. One of the songs was the traditional song "Rye Whiskey". Christian Williams decided to rearrange the music and came up with a totally different melody and chord progression. One thing led to another and he got interested in putting together a new album. In an e-mail Christian Wiliams explains: "I didn't want to agonize over what the songs should be about, though, so I just decided to collect more words already written. Once I spent some time reading and thinking about the lyrics, I'd start to hear a melody in my head and as soon as I found out that it worked with the meter of the lyrics, I'd made a quick recording of the song with my iPhone." The plan was to treat the recordings as demos and take them into a studio and record them professionally. But as he kept listening to the recordings over and over, the rawness of the songs grew on him. He realized that those recordings were as close as he was ever going to get to the initial point of inspiration. Some of the recordings were literally made in the moment. In the e-mail Christian Wiliams explains the choice of title: "I felt compelled to tip my cap to Marconi and the technological advancement that made it possible for me to come up with a song, record it through my phone, and instantly be able to transmit across the globe."

The album "Marconi" is less than 25 minutes long and contains seven songs. The first song is the above-mentioned song "Rye Whisky". It has been recorded twice by Christian Williams (On "The Long Winter - Vol 1: B-sides and Alternate Takes" and "For My Mind It Was Flying"). This version, however, is more built around the vocals. The second song is "In the Shadow of the Pines". Words by Hattie Lummis (1895) and adapted by The Carter Family. The pace is faster and the melody structure is more addictive than the reference recording with The Carter Family. "Oh, darling, come love me as before / Come back to leave me nevermore / At that spot I'm sad and lonely / And the sun no longer shines / Come and meet me in the shadow of the pines." The third song is "One Little Word". The song is of unknown origin. There's not much bluegrass left in the arrangement, but the song is tastefully adapted. The fourth song is "Train 45". The song is traditional. This version goes somewhat slower than most versions and is more twangy. The fifth song is "Waterbound". The song is new (2004) and is written by Dirk Powell. The original song is great. This version goes slower with more emphasis on the lyrics. The verses also comes in a different order than on the original recording. The sixth song is "Who's Going Down". This is a traditional bluegrass tune of unknown origin. Sometimes referred to as "Who's Going Down to Town". This version goes significant slower than most versions and has more emphasis on the chorus. The seventh and last song is "There's No One Like Mother". Words by Charles A. Davies (1877) and made popular by The Carter Family. Sometimes referred to as "There's No One Like Mother To Me". This version is more driving and melodic than the standard reference recording with The Carter Family. And what's the overall assessment of the album? My starting point is the notion that if you got nothing new to bring to the table, don't start any projects. Lyrics and music are often a indivisible whole. The words for these songs already written and widely known. But they are properly reworked and restored by Christian Williams. The idea for this project was to set his own music to the words. His interpretations are traditional and innovative at the same time. The recordings reminds me of the fact of how different a song can be with just a different arrangement. In my opinion and despite being almost an audiophile, the rawness and simplicity gives the songs an aura of field recordings. Christian Williams really knows what he's doing and has done a bang up job. The recordings also reminds me of how close concepts like "traditional" and "gothic" really are.

Christian Williams is one of the stalwarts of the gothic country genre. Should we get our hopes up or was this only a one-off recording? In the e-mail Christian Wiliams writes: "As far whether or not this is a one-off recording, my guess is that I'll probably do another album like this again. Right now, I'm more focused on painting and some other non-folk music projects, but I really did enjoy the process of working with these words and making new music for them. They represent my contribution to the long tradition in folk music of keeping old songs alive by borrowing, combining, and reworking the words and music so they can become truly timeless." Anyway, Christian Williams gothic prairie country is sorely missed.