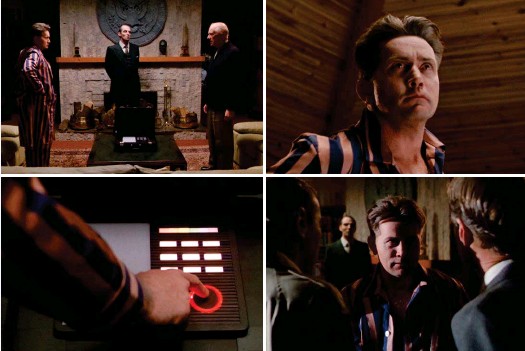 We are living in worrying times with unpredictable world leaders who are quick to take offence and lacks impulse-control. Long ago, I saw the screen adaption of Stephen King's "Dead Zone" with Christopher Walken as the central character. Walken plays a schoolteacher, who awakens from a coma to find he has psychic powers. Despite Walken's extraordinary acting skills it was Martin Sheen (President Stillson) that made an imprint, because of his ghastly un-presidential qualities. Ironically, Martin Sheen later came to play president Josiah (Jed) Bartlet in the television series "The West Wing". The Stillson and Bartlet characters couldn't be more far from each other. "Dead Zone" made a long-lasting impression on me. I still rembember the nuclear button scene. This is how I imagined that the world would end. In flames. Here it the dialogue (it's more of a monologue) in its entirety.
President Stillson: "Do it, General."
Five Star General: "You're insane. I won't."
President Stillson: "Do it! Put your hand on the scanning screen, and you'll go down in history with me!"
Five Star General: "As what? The world's greatest mass murderers?"
President Stillson: "You cowardly bastard! You're not the voice of the people! I’m the voice of the people. The people speak through me, not you! It came to me while I slept, Sonny…my destiny. In the middle of the night it came to me. I must get up now, right now and fulfill my destiny! Now, put your goddamn hand on that scanning screen, or I'll hack it off and put it on for you! Do it!"
Five Star General: "May God forgive me."
President Stillson: "Congratulations, General."
Sonny Elliman: "Complete the sequence, Mr. President."
President Stillson: "My destiny!"
President Stillson: "Thank you, Sonny."
President Stillson: "Let them come up."
Vice President: "This is not necessary Mr. President, we have a diplomatic solution."
President Stillson: "Mr. Vice President, Mr. Secretary, the missiles are flying. Hallelujah. Hallelujah."