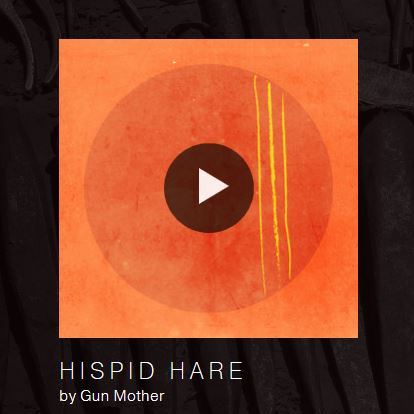 Reverend Glasseye sadly decided to end his legendary musical project after several setbacks. In a blog entry in August 2013 he wrote: "...In fact, I would say that most of the hurdles that Reverend Glasseye faced in its lifetime were caused by me. Back in the mid-oughts, when the band was doing extraordinarily well, it was my own abundant and needlessly existential neurosis that caused the band to stall out completely. As more people began to like the music we were making, I became more and more dissatisfied with it, and at that point I had a very hard time listening to the advice of others." Reverend Glasseye is one of the most talented songwriters in the gothic country genre. In fact, Reverend Glasseye was too talented for his own good. Reverend Glasseye has nowadays moved on to a new musical project, Gun Mother, read more here (opens in a new window). If you click on the picture to the right you will be able to listen to "Hispid Hare" from what will be their debut album "These Golden Threads". The album is to be released at a time undetermined. Reverend Glasseye recently wrote on his Facebook page "I am incredibly proud of this record and I hope you enjoy this song...This song, in particular, is one of my personal favorites. It took an agonizingly long time to complete and to comprehend. I wrote it in a dark place towards the end of Reverend Glasseye and it has the distinct of being one of the only songs to make it through all of my projects." I was flabbergasted when I listened to the song and I can't stop listen to it. I can't wait for the Gun Mother album. Reverend Glasseye is disbanded, but Reverend Glasseye lives on.