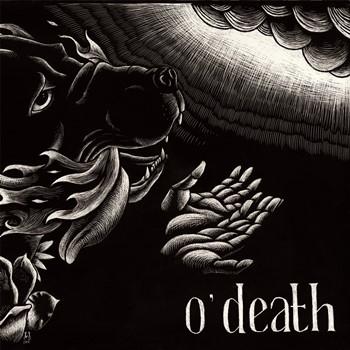 O'Death released their long awaited album "Out Of Hands We Go" on Northern Spy Records on October 7th. The last album "Outside" was released in 2011. Some people missed the raw and rough sound from the two first albums (not counting the cd-r "Carl Nemelka Family Photographs") on this album and was not too amused by the worked through and more melodic sound. However, in my opinion it was the right move and a natural progression for O'Death. The right direction is always forward. I got a link with a digital download in FLAC format of the new album, while waiting for the physical cd copy to arrive. I was so curious of the sound that I condescended to this despicable format. This is what I found. "Out Of Hands We Go" takes its starting point from the point where "Outside" ended. The album starts off with "Herd", a haunting and beautiful song. The banjo-picking and choruses are extraordinary. The introduction to the album is so epic that for a moment I worry that O'Death have burned everything they have in just this song. In the following songs "Wrong Time", "Roam", "Wait For Fire" and "Go & Play With Dead Horses" they prove that my concerns are unfounded. A few songs on the album "All Is Light", "Apple Moon" and "When My Dog Gets Out Let Him..." don't meet the high quality standard of the other songs on the album. But it's a small remark on an otherwise almost perfect production. The last songs of the album "We Had A Vision", "Heal In The Howling", "Isavelle" and "Reprise" are very strong and reinforces the overall impression. This is without a doubt an album full of gifted songwriting, sparse and balanced instrumentation and worked through arrangements. It can be charachterized as a highly sensitive and introspective album. But, dont worry. It's still, by normal standards, raw and rough. This album is one of the best albums this year in the "gothic country" genre. You can order the album here.