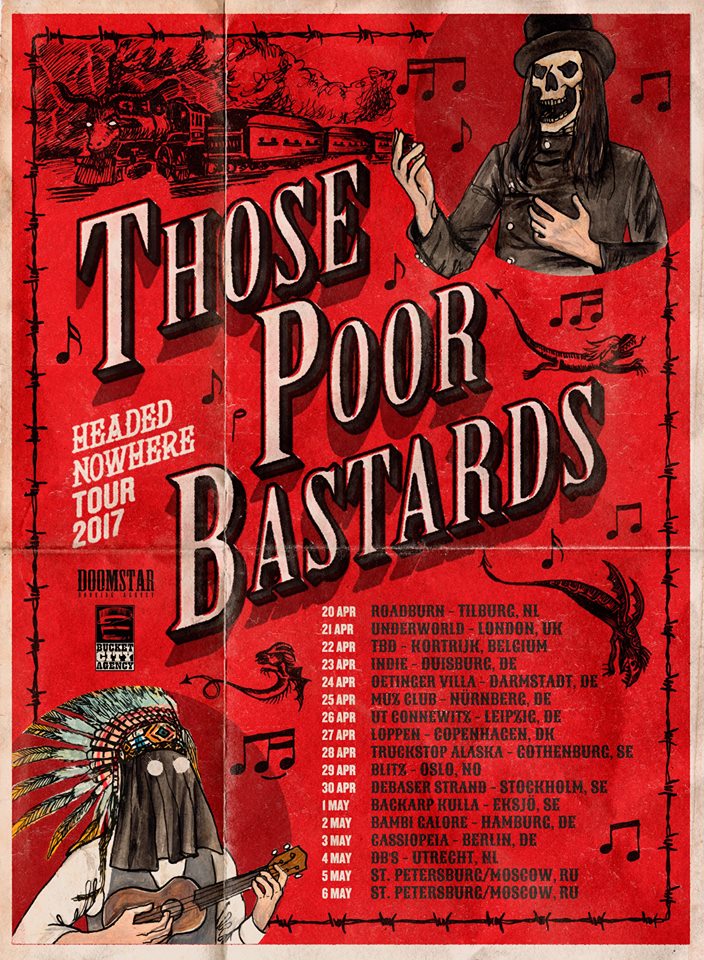 Those Poor Bastards, a.k.a. the "Prophets of the Country Doom", are coming to Europe. To my knowledge, this is their first tour in Europe. This is the biggest thing since powdered milk and could only be matched by a tour with Sons of Perdition. For those unfamiliar with Those Poor Bastards let me quote them: "I'm warning you friends, this is not the sanitized, safe, and clean as the neighborhood ball country bullshit you're used to. No, this is country music as it was meant to be, raw and bleeding." They will tour in the Netherlands, United Kingdom, Belgium, Germany, Sweden, Norway, Denmark and Russia from April 20th to May 6th (see preliminary dates and venues on the right). Touring in Russia isn't standard procedure for a band from Wisconsin (or any band). However, the Russians are very committed to "death country", especially the "evil doom" branch. The gloomier the music, the happier they will be. Maybe, the dark streak in the music of TPB fits their very troubled mindset all too well.

Those Poor Bastards will be passing through Sweden. In Sweden lives very few, but dedicated, music lovers with a strange appetite for miserable and primitive old-time gothic country music. Those Poor Bastards are booked for three concerts in Sweden: Stockholm, Göteborg and Eksjö(!). The choice of Eksjö surprised me, since it's an old town from the 14th century and former centre of military establishments with less than 10 000 inhabitants. But maybe Eksjö is a gothic hub that I have overlooked despite my thorough and intense studies. Everything is possible. Those Poor Bastards are going to play at Debaser Strand in Stockholm, which is a perfect venue for this kind of music. However, at the moment there's no information on Debaser's website and the concert isn't confirmed. The same goes for the other two concerts. Let's hope for the best and plan for the worst. I'm curious about who will attend the concert since there are no reference studies for Sweden. I will devote myself to participant observation. I will attend incognito as the Ambassador. What I do know is that it's going to be a blast. Their latest album “Sing It Ugly” takes distortion to a new level. It will be great to see and hear them live. It may very well turn out to be a once in a lifetime event. I don't want to miss this for the world. If I have the time I will write a review. Someone has to take on the important mission and document for posterity. Someday it will all be over.