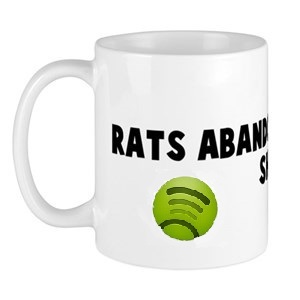 Rats have been said to be the first to sense an impending disaster, such as a sinking ship. "Ship-builders" a.k.a. founders Daniel Ek and Martin Lorentzon are now selling shares worth $220 000 000. They're already filthy rich and don't need any housekeeping money. It's hard to escape the idea that they discreetly and quietly are abandoning the sinking ship. The golden rule: if the founders are selling, you shouldn't be buying. Risk capitalists and small time investors are more than willing to put their money in this project, despite it's leaky as a sieve. Spotify has never been profitable. Some stunning loss figures: 1 339 million dollar (2017), 412 million dollar (2016), 278 million dollar (2015), 182 million dollar (2014) and 100 million dollar (2013). Some business analysts believe that Spotify will be profitable in 2019. Yeah, right. When Hell freezes over! The Swedes are, despite the similarities with a pyramid scheme, impressed by Spotify's inflated success. People are drawn to this high-risk project like moths to a flame. Speaking of flames. Soon the whole shit will go up in flames. Or more likely sink and disappear below the surface. This future scenario has been elegantly put by Prospero in William Shakespeare's The Tempest: "In few, they hurried us aboard a bark / Bore us some leagues to sea; where they prepar'd / A rotten carcass of a boat, not rigg'd, / Nor tackle, sail, nor mast; the very rats / Instinctively had quit it."