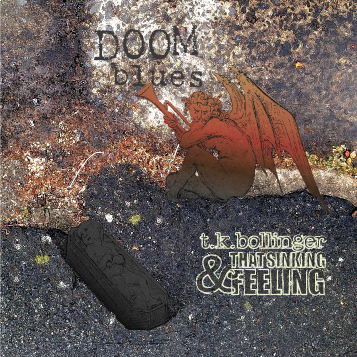 Unaffected, uncompromising and underrated. I associate these three adjectives, but not necessarily in that order, with T.K. Bollinger. A year or so ago the Australian artist went, without prior notice, off the grid. Reportedly, he felt a strong need to tune out from social media and concentrate on songwriting and think about what was next. I wish that more artists had the guts to follow his example. Instead, they do the complete opposite. Anyway, T.K. Bollinger has returned with a "new" album called "Doom Blues". This is a whole band album - t.k. Bollinger & That Sinking Feeling with Vis Ortis (drums) and Richard Amor (bassist). The word "new" is knowingly placed between quotation marks since the eleven songs are the result of the rehearsals and recording sessions in Northcote (a suburb of Melbourne) during 2013/14. The songs have been nursed over the years and finally been mixed and released. This odd circumstance got my attention since these recordings preceded T.K. Bollinger's three solo albums "Shy Ghosts" (2016), "What's Left Now You Are Dead To Me" (2017) and "The Tighter You Hold Onto Something The More Likely It Will Fall Apart In Your Hands" (2018). Could there be a link to them or a piece of the jigsaw here? I've had the opportunity to pre-listen to the album. I pushed the play button with trembling hands. The opening song "My Shadow's Loving Arms" brutally transcends me to Wasa Skivbörs, an old record store in Stockholm better known for exclusively and constantly playing albums with 12 Bar Blues Progression. I froze on the spot. Could this be a dedicated blues album? No, thankfully it isn't. My limbs thawed. It is what it says: doom blues. It incorporates moods from mangling gothic to sensitive hymnal. The second and third song "Fear Comes Knocking" and "A Land of Thieves and Liars" are good examples of the shifting moods. The fourth song "The Bridges You Burnt" clearly belongs to one of the highlights on the album. "Fortune loves you best / When your heart knows no rest / It brought you here to build / But you chose to break its will / And made those bridges burn". The fifth song "Hold Her When Her Heart Is Breaking" clearly has a softer approach and could easily fit in on of any of the later solo albums. The sixth song "What My Devils Know" is twangy, but a bit weak. The seventh and eight songs "Leaving Me Empty" and "To Lose the Darkness" are simply magnificent. The same can be said about the ninth song "The White Man's Game". So far, I'm impressed of the song quality and it's not over yet. The next to last song has the witty title "Sex Starved and Money Hungry". In this tenth song T.K. Bollinger stretches his vocal abilities to the limit. The closing song is very important. It concludes the album and, when it's done meticulously, wraps it all up. What's better than to end an album in a splendid crescendo? The eleventh song has the title "Twelve Reasons Not to Live Forever". "There is no pause, no escape button, one exit clause / No control Z, just this endless loop running in your head / Why? Why, why, why / Will no answer come? And all you can do is / laugh or cry". And then it's all over. I ask myself: is there a link and a common thread from this album to the solo albums? I think the answer is yes. If this was copyright law than this album would pass the threshold of originality with very large safety margins. "Doom Blues" is more versatile than "A Catalogue of Woe" and an indispensable part of the musical progress of T.K. Bollinger. The press release is modest: "Others may have given up, but t.k. bollinger and that sinking feeling continued to have faith in these songs and the process that they committed themselves to, uncaring for recognition or reward, they merely wanted to bring these stories to the light. Now it’s your turn to listen and see if you can hear their worth." The answer is yes, yes and yes! If this is the final testament of t.k. Bollinger & That Sinking Feeling then they surely went out in style. You can order the album here (opens in a new window).