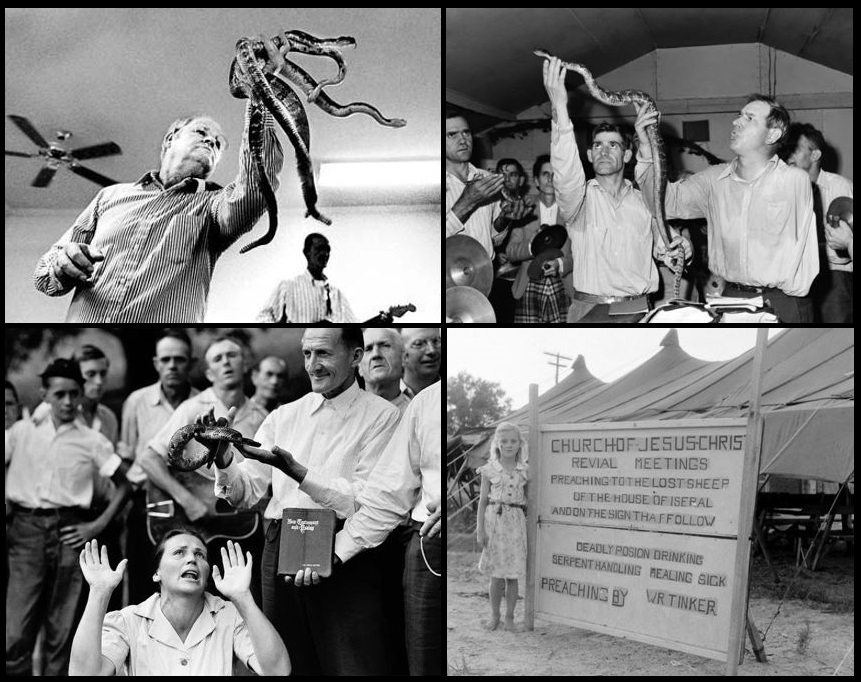 Snake handling, a.k.a. serpent handling, is a religious rite practised in a small number of churches in the United States, usually characterized as rural and part of the Holiness movement. The dangerous rite is a demonstration of strength of faith. If you are bitten, and die, it can be interpreted as a lack of faith or failure to follow the leadership of the Holy Spirit. If you are bitten and not treated, and live, you are regarded as a strong believer. It can go either way. Over 60 deaths have been documented in the United States. The practice began in the early 20th century in Appalachia and is based on a literal interpretation of the biblical passage in Mark 16:17-18 (King James version): "And these signs shall follow them that believe; In my name shall they cast out devils; they shall speak with new tongues; They shall take up serpents; and if they drink any deadly thing, it shall not hurt them; they shall lay hands on the sick, and they shall recover." The best known example is "Church of God with Signs Following", which is characterized by the five signs in the biblical passage: exorcisms, speaking in tongues, handling of serpents, drinking of poison (preferably strychnine or lye) and laying on hands. The founder of snake handling, minister George Went Hensley (who lived a troubled and dramatic life), claimed to have been bitten over 400 times by various snakes. Snake handling of today (prohibited but still practiced) is sometimes accompanied by music. I visualized slow and monotone banjo picking stripped down to the bare bone. However, a reliable source revealed to me, that the music being played is fleshy Southern rock in the same vein as Lynyrd Skynyrd and Molly Hatchet. I'm shocked and appalled.