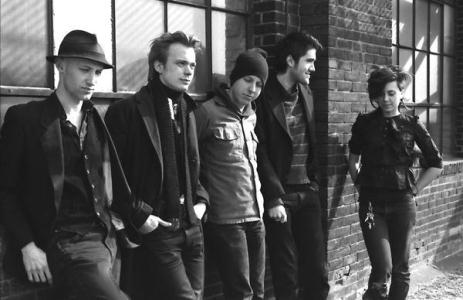 The Blackthorns is a band from Minneapolis, Minnesota. But the band members have their roots in states like Colorado, Louisiana and South Dakota. The band was formed in 2004. No reader of this article series may have failed to notice that there are many different branches and twigs of "gothic country". This particular variant I entitle "dark industrial gothic country". The music is dark, electric and unsettling combined with traditional roots. The variant can also be called "psycho western" or alternatively "sinister western". The Blackthorns is among others inspired of 16 Horsepower, Nick Cave and The Swans. Blackthorn (prunus spinosa) is a common band name. Several other bands in hip-hop, death metal and Celtic folk music have chosen the same name (this article refers to P 962702 on ALL MUSIC GUIDE). It’s important to be attentive when looking for information about the band. However, the differences are so great that there’s hardly any risk of confusion between namesakes. The Blackthorns is indeed a very good band name. An early idea for band name was Sarkazein, which is derived from the Greek word "sarkasmos" (sarcasm). It means cutting teeth (in rage). The name was unfortunately already taken by a French metal band (!) outside Paris. The working title "The Altar Killers" was also a very spectacular but not fully thought idea in the startup phase.

The Blackthorns was disbanded in 2007. The Blackthorns consisted of Christian Thaddeus Petty (banjo, guitar and vocals), Rick Arnold (drums), Jackie Beckey (viola, accordion, saw and vocals), Cody Bourdet (bass) and Jonathan Kaiser (cello, auto harp and some other instruments). The following consumer guide information can be found on the prestigious indie site cdbaby that distribute their album: "With these traditional tools, the Blackthorns play the sort of folk songs you'd expect to hear rising from the screened porch after a bomb has been dropped on a decaying Midwestern town." This is a very apt description. Like many other bands in the "gothic country" genre, the members have a background in various trash, punk and no wave projects (“no wave” was a short-lived but influential underground music style). The band was brought together by an interest in the darker part of folk and country. The band's first gig was scheduled at the First Avenue venue for Election Day November 2, 2004 but was canceled when the venue suddenly and unexpectedly closed. Their debut gig took place April 2, 2005 at the Alamo House in Minneapolis. However, it was not the intriguing music that became the lasting memory from that night. A rowdy guest destroyed a toilet, which led to a minor flooding and subsequently to that band were not welcome back. The farewell gig (after only three years) took place on 8 September 2007 at The Belfry Center in Minneapolis. Very short burn time for The Blackthorns, indeed. The band disintegrated into bands like Chickadee Mountain Martyrs, Dark Dark Dark, Brute Heart and Poor Weather Club.

It’s not possible to listen to The Blackthorns while casually doing the dishes. The music requires focus, concentration and presence. It's also a pretty depressive music. The music consists of a wall of sound, slow tempo changes and drawn-out tones. Petty and Beckey sing alternately in sad and sorrowful harmonies. You have to be in the right mood for this kind of music. If you're not already feeling depressed before you start listening, you certainly become depressed after a while. In contrary to many other "gothic country" bands, everyone in the band contributed with both music and lyrics. The self-titled album was released June 17, 2006 at Cinema Revolution Records. The album is short: 35.16 minutes long and contains only six songs. One of the songs is "Wayfaring Stranger", which in itself tends to increase the probability of being caught in my trawl and honored by an article. The Blackthorns has a song (Black Ships) on one of the four compilations with The Best of Dark Roots from Devils Ruin Records (Rodentagogue II). It is a mark of quality.

The album cover is stylish: the name The Blackthorns and a white windswept tree against a black background. Very "gothic" and this renders a top ranking when it comes to album covers.

Below is a suggestion for a CD compilation containing all songs from the the album. Yes, I have come to the conclusion that it's justified in this case.